July 04, 2020
I seriously wonder why I occasionally blog. These things fell out of fashion a long while ago, right? Meh. I'm old.

So, without further ado, I present the weeds marring our backyard.

(Other than the dog pee.) 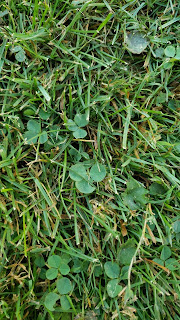 Our first guest is Trifolium repens, better known as white clover. Technically, it's a member of the bean family (Fabaceae).

It's an evasive little brat that invades my flower beds. It's happy to tuck itself under just about everything.

I take solace in the fact that bees love the flowers. I like to think I'm doing my part to keep the honeybee population thriving.

And, to be honest, it really is good for the grass according to Gilmour's "6 Lawn Myths Busted" article:

"As a natural lawn fertilizer, clover adds nitrogen to the soil which benefits surrounding grass plants. It's also green, hardy, and drought tolerant. It out-competes bad weeds and it grows well in shady spots." 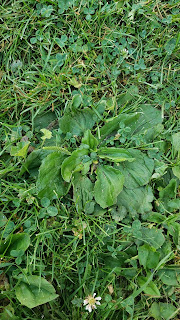 This ugly, invasive-as-fuck herb is supposed to have medicinal value. It reportedly is used to treat constipation, cough, and wounds. Don't try it. You might be allergic to it.

It roots deep and doesn't like plucking. The thick root tangle captures dirt as it's pulled. Thus removing it allows for other things, like clover, to flourish in a dirt patch devoid of grass.

Common plantain sends out slender inflorescence riddled with pedicellate flowers. These contribute to the weed problem when the plant is plucked. 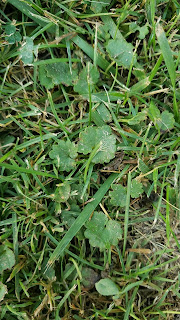 Glechoma hederacea, also known as ground ivy, creeping charlie, and field balm, competes with just about everything in my yard.

It's a perennial evergreen plant with a penchant for trailing. If your neighbor doesn't kill his, it will find a way to make itself at home with you.

This plant has become my nemesis in our new flower bed. The bed itself backs the fence between us and our elderly neighbor. Her sons don't maintain her garden. The field balm stuffs itself between the fence rails and then trails into the new bed. It grows quickly, sending down tiny roots to anchor it.

I have to confess that pulling it is a bit satisfying, and the plant is somewhat aromatic. 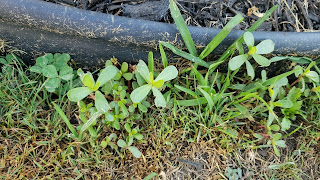 These are fascinating plants. They're edible (by people; not for dogs). I consider them qualifying as one of those things you tend on a micro scale. The tiny flowers form equally tiny pods which then spill out teensy seed.

Other than that, they're better off in our grass and not my flower beds. If you'd like to know more about them, Susan Mahr's article can be found at the University of Wisconsin-Madison Master Gardener Program website.

OTHER THINGS
The original homeowners, and the owners after them, added touches that can still be seen to this day. 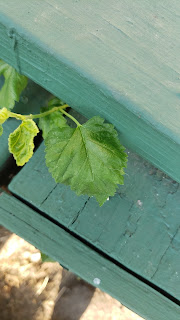 One of my banes is the white mulberry (Morus alba)  growing under the porch.

It's easy to see that the original structure was a simple stoop out the back door. This evolved into a small porch with steep concrete steps. That setup flourished into a larger porch with an overhang.

They never bothered to pull out the mulberry. There isn't any easy way to kill it or transplant it. I go to war with it every spring, slipping hedge clippers through slats to discourage branches.

I also have to clip the mulberry leaves that pokes up between the gaps in the porch floor - Hershey loves to eat them. All parts of white mulberry, except for the ripe fruit, contain a milky, toxic sap (latex). 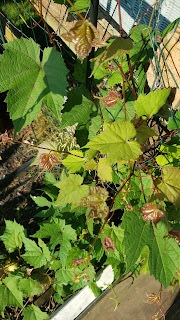 And then we have the wine grape, vitis vinifera. As with the white mulberry, the prior owners never pulled this plant up. It took over the back deck, rotting out the rails and deck itself. Better Half and I rebuilt the deck two summers ago. Nothing we did would kill this beast.

We have to remain on top of it. It crawls and coils woody vines into my flower bed, tearing down tender plants or else bending the hardier ones.

It climbs up the side of the house via the gutter drain. (We had a tuft of it growing around the area of the roof... two stories up. I've bleached it, poisoned it, sheared it, and cursed at it. It thrives. In case you're wondering...it does not produce any grapes.

It also houses ants and bird mites. I would love to transfer some of the preying mantis colony from the garage flowerbed to this grape-coated area.

I'll see about uploading garden photos over the summer. As is apparent with the weed population, I haven't felt well enough to do much this spring and summer.


6 July 2020
Found some sweet violet growing in the fire ring. 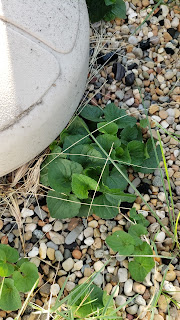