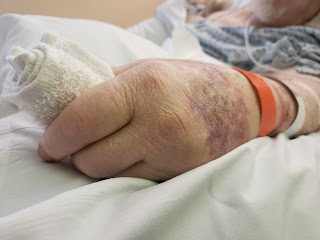 I have always loved my father's hands. They healed, they taught, they comforted.

Calluses and scars are an eternal testament to his hard work. Though he was an engineer, he was hands-on for most of his projects.  He worked for Paramount Sound, which meant he was busy in ways the public never saw. He also worked for Hannon Engineering. There was a third company in California, but I can't recall the name. Radiophone Engineering, I think.

Regardless, his work took him abroad during my childhood. Whether it was designing and installing a sound system for Caesar's Palace, a fire system for the Kennedy Space Center, a comms system for South Korea's parliament building... he experienced more things than most of us, and always brought me back a souvenir.  And, when he worked for LVW in Colorado, they sent him to California to troubleshoot, and he brought back sand from my favorite beach.

I thought of these wonderful memories as I sat beside him today, holding his hand in the quietude of his hospital room. His fingers curled around hand rolls to keep them from drawing up and stiffening. (The ward had many of these anticontracture tricks in place but none were so obvious as those washcloths. Their very presence stumped my mother.)

Dad is only capable of mumbling though, and I can't read his lips because he can't articulate. I have to give things a guess, and even then I don't know how to respond.  I allow a pause and then stroke his hair and whisper, "I know, dad. I love you. It's okay."

My father and I have always enjoyed the silence between us. When I was young, we spoke only when we had something to say, or when I gave him the opportunity to share his mental wealth by asking him solid questions.

Otherwise, we allowed a quiet contentment to flow around us. Whether it was fishing in Rancho Park, or holding hands as we walked into the ocean's waves, there was little that needed to be said. Ours was a language of body gestures, laughter, grunts, furrowed brows and bemused grins.

When I moved to Ohio, that silence became profound. We spoke a little on the phone but, as our communications via gesture were better in person, the long distance conversations were brief.  I was so thrilled when they moved out here! Dad and I could talk in silence again.

There is an entire discussion in the picture below.  We had gone out for Chinese food after visiting Mom in the hospital. Better Half is absolutely binging on Pepsi. Cup after cup! He claims to be really thirsty.  Dad looks at me, playing with his straw and a bit bemused that any human being can hold that much liquid. I had cocked a brow to indicate that I thought it troublesome. Dad returned my facial gesture with one of concern. He stopped fiddling with the straw wrapper: "I'm worried." 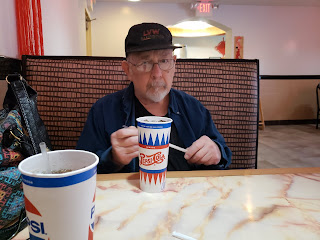 He had every right to be.  Better Half tested his sugar once we got home - it was in the 400s.


Learning communication conveyed by hand gestures isn't that difficult. It's best studied when the body and mind are well. It can pay off handsomely if that person loses their ability to communicate via normal means. Each time Dad has hit a cognitive slump, his hands have spoken loudly, often in conflict with his own words.

"George, are you in pain?" my mother worriedly shouts at him. She doesn't realize that he can hear her without the need for raised voices. His face scrunches in response to the noise.

I sigh and allow my eyes to flicker between his own eyes and his hands. She shouts the question again. I see the left hand raise and quiver: so-so. She shouts as she asks if he wants a pain pill. The left hand curls into a loose fist and comes to rest on his belly: no.

We had never allowed my mother into our secret silence club. The gestures were lost on her.


This communication method worked fine until the time came for him to be shipped back to the main hospital, Trinity West. He went from ER to hospital room, and then to hospice upstairs. We realize death is close.  Though he can mumble, his hands no longer speak.

I spoke with my own, rubbing his fingers as they held the roll, or slipping a finger near his thumb so he could give it a squeeze. The time will come when he won't ever squeeze back. I dread it.

I've also discovered that many of the features found in his hands are echoed in my own. I envied my mother's hands - delicate in structure, with beautiful nail beds and perfectly petite fingers. In comparison, from the knuckle up, my hands belong on a man. I've subtly tried to hide them most of my life.

As I  sat there tonight, I realized I was holding a larger version of my own.  Same knuckles, palm, back of the hand, nail beds... all scaled down a bit but still very mannish. My calluses were gone but there were still scars there. How a woman can go nearly 50 years and not cotton on to the similarities boggles my mind.

Giddy from the realization, I snatched up my phone and took a picture. Then I made sure the washcloth was properly tucked in place, and I kissed the bruises on the back of his hand.

Yes, he'll leave us soon, yet I'll forever have a reminder of him every time I look at my own hands.