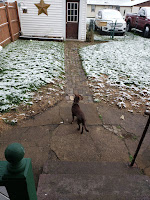 Hershey experienced his first snow the week before last. (I would have published this sooner but life has been so damn hectic.)

At first, he didn't trust it. The texture was wrong, the grass was too stiff.

The scent made him chuff.


The air had a hush about it. His barks seemed louder. That frightened him, too.

He soon worked out the courage to explore.  It was only a dusting and knocking it off the grass made him feel better. No zoomies, however. He was reluctant to run through the creepy white stuff. 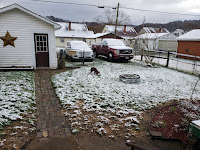 I thew a flip-flop, his favorite thing to retrieve, but he ran in the opposite direction and cowered between my knees while I finished my cigarette.

He reluctantly walked down the path and planted his front feet in the dead grass and dirt. The back feet remained firmly rooted on the brick. He leaned. He looked at me.

He let loose the flood gates, spilling what seemed like 10 gallons onto the mud.

Our two "porch birds", Bob and Frank, soon emerged to sample the cold air.  That seemed to alleviate some of Hershey's tension.

"Maybe the geese were right about this migration thing?"

"Shut up, Frank."
Eventually, Hershey (the lover of ice cubes) discovered that snow means treats. He lapped it off the deck and balked at coming inside until he had cleared away the slush. 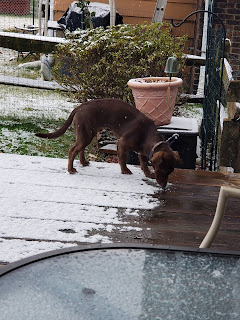