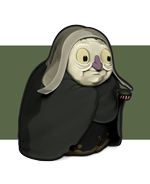 "Auntie Whispers, do the wild turkey!"

Is that a new dance?

"No. Wild turkeys! Write a thing about wild turkeys." 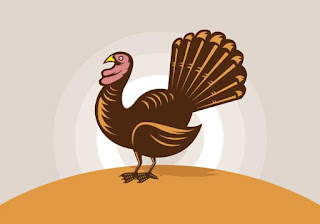 Turkeys are dark overall with a bronze-green iridescence to most of their plumage. Their wings are dark, boldly barred with white. Their rump and tail feathers are broadly tipped with rusty or white. The bare head and neck wattles varies from red to blue to gray. Contrary to myth, Toms do not sport their testicles on their heads. Get your mind out of the gutter.

Behavior
Turkeys group themselves into thuggish flocks, called rafters, and search on the ground for nuts, berries, insects, and snails. When not assaulting mailmen and the elderly, they use their strong feet to scratch leaf litter out of the way.

In early spring, males gather in clearings and behave like assholes. They puff up their body feathers, flare their tails into a vertical fan, and strut slowly while giving a characteristic gobbling call. This behavior often leads to the wrongful identification of the birds as politicians. At night, turkeys fly up into trees to roost in groups whereas politicians crawl under rocks and hiss at anything that approaches them.

Habitat
Wild Turkeys live in mature forests, particularly nut trees, interspersed with edges and fields. You may also see them along roads, in woodsy backyards, and brazenly strutting through towns to terrify small children.

Flight
Despite their weight, wild turkeys, unlike their domesticated counterparts, are agile, fast fliers. They use this ability to scare the shit out of motorists. In some states, struck birds may be taken by those that enjoy hunting with their fenders.

Vocalizations
Turkeys have many vocalizations: "gobbles", "clucks", "putts", "purrs", "yelps", "cutts", "whines", "cackles", and "kee-kees". Anyone that lives in a rural area can attest to their penchant for concealing themselves near open windows and doors in order to torment the humans inside.

Significance in America
The idea that Benjamin Franklin preferred the turkey as the national bird of the United States comes from a letter he wrote to his daughter Sarah Bache on January 26, 1784. The main subject of the letter is a criticism of the Society of the Cincinnati, which he likened to a chivalric order, which contradicted the ideals of the newly founded American republic. In one section of the letter, Franklin remarked on the appearance of the bald eagle on the Society's crest.1

"Others object to the Bald Eagle, as looking too much like a Dindon, or Turkey. For my own part I wish the Bald Eagle had not been chosen the Representative of our Country. He is a Bird of bad moral Character. He does not get his Living honestly. You may have seen him perched on some dead Tree near the River, where, too lazy to fish for himself, he watches the Labour of the Fishing Hawk [osprey]; and when that diligent Bird has at length taken a Fish, and is bearing it to his Nest for the Support of his Mate and young Ones, the Bald Eagle pursues him and takes it from him.

With all this Injustice, he is never in good Case but like those among Men who live by Sharping & Robbing he is generally poor and often very lousy. Besides he is a rank Coward: The little King Bird not bigger than a Sparrow attacks him boldly and drives him out of the District. He is therefore by no means a proper Emblem for the brave and honest Cincinnati of America who have driven all the King birds from our Country... I am on this account not displeased that the Figure is not known as a Bald Eagle, but looks more like a Turkey. For in Truth the Turkey is in Comparison a much more respectable Bird, and withal a true original Native of America... He is besides, though a little vain & silly, a Bird of Courage, and would not hesitate to attack a Grenadier of the British Guards who should presume to invade his Farm Yard with a red Coat on."

So remember, those of you that hunt rather than buying your holiday meal from a grocer, that you are doing your part to protect your fellow citizens when you hunt this... patriotic Bird of Courage.