I finally spotted the bunny living in our backyard flowerbed.  He's just a yearling, but he's leaving pellets all over the yard and I'm worried that Angus will get him, if not my mother's Dante.

But enough of that!  On to the fun!

The September Equinox was this week.  We planned to do a small bonfire that night but it rained.  So, why not tonight?

We were worried Hershey would react poorly considering his history (mother and siblings perished in a fire when his original owners tried to heat the dog box with a bare light bulb).

He took a healthy interest when Better Half lit the kindling. I suppose he felt safe knowing he wasn't confined with the flames. It also helped that his new daddy soothed him and gave him love while they worked. 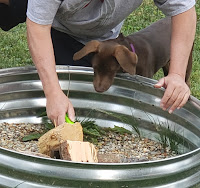 It was time to break out the goods.
A new campfire kettle. 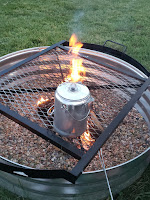 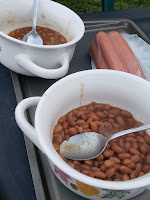 And a hot dog. 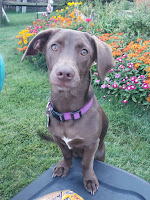 I'm very proud of how well Hershey did.  He did retreat to the back porch as darkness fell, sporadically zooming around the yard with a broken flip-flop when the mood suited him.

Better Half, Angus, and I settled in to watch the flames and listen to the crickets. No music. No phones except for pictures (and occasionally tweeting said pictures), and no stress.  It was nice.

We're looking forward to brewing some coffee once the nights get colder. 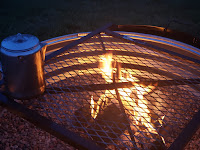 If you fancy a good brew, check out Black Rifle Coffee. A potion of profits is donated to various groups such as veterans, and firemen and police organizations.

I purchased a bag of Thin Blue Line last month. Delicious! I'm looking forward to trying their other blends.