Beautiful Baltimore.  While the sites are lovely, the people are more so.

My hotel is located in an area teeming with humanity. It's a melting pot personified by the hotel's staff, the Uber drivers, and the employees working at the Marriott where the convention is held. It's a warm feeling that I haven 't experienced since leaving California.

I had also forgotten about traffic.  Pittsburgh has its share but, overall, the driver's are polite. Baltimore is a demolition derby.

This morning's driver cautioned me about evening rush hour.  "Don't blink," he chided.  He hailed from Jamaica and, after three years here in the US, he still hadn't adapted to Baltimore's streets.

He was somewhat correct - shutting one's eyes is better than blinking.

My training started at 0800.  I arrived at the Marriott amidst a sea of uniforms.  Yeah, I found the convention.  I wasn't able to explore any vendor areas; IG training was on the ground floor. Very informative, rather relaxing.

Lunch, however, was a shock. 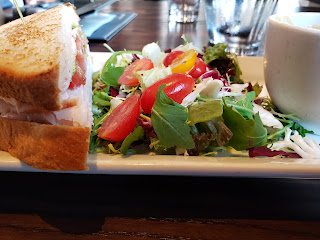 I opted to use the restaurant inside the hotel.  Apropoe's bills itself as an "Edgar Allan Poe-themed eatery & bar".  The menu was filled with fancy creations. Lots of calorie advisories, but no prices.  I settled on the lunch combo - half a turkey BLT, some greens, and a tiny bowl of crab chowder.  Only 200 calories. Impossible!

It arrived 35 minutes later, leaving me only 10 minutes to wolf it down.  And the price?  $20.  That wasn't the calorie count. I would have gone elsewhere had they bothered to put a dollar sign near the number.

This trip is costing entirely too much money.

I suppose the hotel and restaurant's location makes up for it.  Nestled against the water in Baltimore's Harbor East district, it offers a lovely spot for taking a break.

This area wasn't as populated.  I imagine the brick pathways were predominantly populated by tourists.  A few local folk passed by but they weren't big on conversation.  Can we blame them?  The last thing anyone wants is to be pestered while on a break. 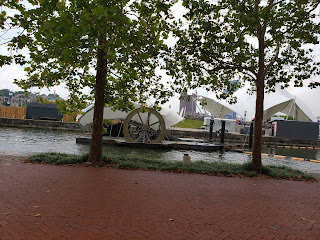 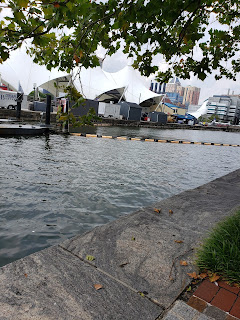 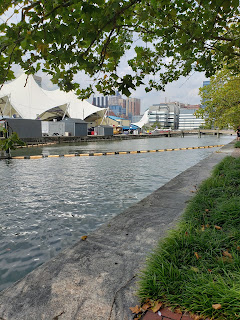 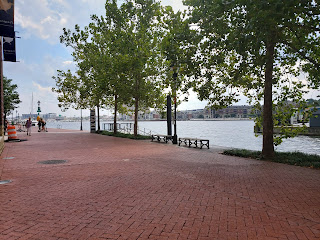 My evening driver was equally as friendly, and more tenacious in driving skills. Apparently, a road caved in due to the severe flooding yesterday. The traffic pattern disruption was readily evident by the sheer number of vehicles on the road.

His head was on a swivel as he dashed through the tiniest spaces, all while humming along to frenetic music. He laughed when I asked if he had "Tunak Tunak Tun" on his playlist, and he flipped through until he found "Shaa Ra Ra".  Ah! Fellow Daler Mehndi fan! He refused to accept a tip once we arrived.


Uber and other companies have scooters everywhere.  I can't imagine Pittsburgh ever getting these.  It's not a bad way to travel, though it might be costly.  One shouldn't depend on these scooters being available when needed, also.

Baltimore isn't without its faults, however. 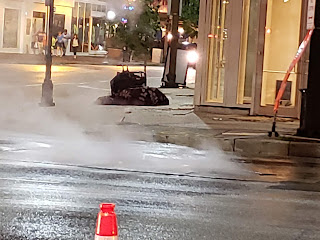 I spotted this woman from my window last night. She was still there when I went out for a cigarette.  I had $5 in my pocket, and a free bottle of water from the hotel. I offered both to her. She smiled and thanked me, and I helped her shift her wheelchair so more of the storm drain steam could reach her while also helping to dry the device.

This is the ending that I fear most. Alone, with no kids, living on the street.  I don't ever take what I have now for granted.  I was sleeping on a comfy hotel mattress while she had only wet concrete.  Had I the means, I would have rented her a room.

She was gone by the morning.  Perhaps she'll be back tonight.

I also hope I can sleep tonight.  No Better Half or dogs make it difficult.  I miss them all.
Summer 2019