Saying goodbye is never easy. After nineteen years, it seems nearly impossible.  Yet we said farewell to our beloved Zephyr today.  The Rainbow Bridge is a bittersweet place.


This Italian Greyhound was the last of the "Colorado Dogs".  We rescued him from a pet shop in the Citadel Mall when he was only a few weeks old.  Nobody wanted him. Iggy's look frail. They lack that fat, roly-poly essence.  He was in a small cage, frightened yet excited. We had just lost our retired racer, Barron, and seeing this little guy brought back a flood of fond memories. We had to take him home.

There are many words to describe him. Silly, sweet, capricious, prissy.  As a puppy, he loved grabbing onto Better Half's slipper as he walked.  He was the lone male of the Bitch Brigade (we had three large breed females already) but, in his mind, he was the crown prince.

He went by many pet names. Wiggy, Iggy, Buddy, Turd, the Turdous. My favorite was "Little Brother". This was bestowed upon him by our Ukrainian exchange student, Vova. (Man, I miss that guy!)

Zephyr was always a bit aloof, preferring to sleep under a blanket than participate in activities. He'd come running for food, then vanish again, a blue fawn ghost haunting our hearts. If he couldn't cover himself up completely, he'd emit a brief bark. Iggy's love to complain. They whine, they emit soft yowls, and they protest the slightest discomfort.

"Oh, jeeze. His head isn't covered," Better Half would lament.

I can't say he slowed down as the years flew by. He was always mellow and a bit foppish. Even in his last days, he didn't lose those personality traits.

About nine years ago, he had every single tooth pulled. It didn't slow him down. His tongue would dangle from his mouth, a dried out strap of prehensile leather. His blindness likewise seemed to be more of an inconvenience than a disability. We still lived on Pembroke at the time. The long stairway leading from the deck to the yard was never an obstacle, though he'd jump the last two steps.

We threw away his red rocking chair when we moved to Toronto. Lacking any place to sleep, he took to laying above my head. We eventually added some folded towels and a dog bed.  It's a good thing I'm short!

The years passed, and we wondered if he'd sold his soul to the devil in exchange for immortality.  Zephyr began to look frail yet his attitude remained the same.  He was now deaf. He'd prance through the kitchen and out the door, leaping the last two steps onto the crack concrete. He still complained if his head wasn't covered. He ate his kibble, avoided the Demon Dog, and carried on as normal.

We began to worry about his health last year.  Eighteen is almost unheard of for a dog's lifespan.  Throughout his life, his health remained good. Sure, there were a few issues now and then.  Dirty ears had to be cleaned. Tooth loss was inevitable. He suffered from cryptorchidism (his wee balls never dropped, and it wasn't worth the anesthesia risk to have them removed).  His major problem was his asshole.

"Zephyr! That's not a soda fountain!"  I'd flick the blanket, tapping his skull in an effort to get him to stop.

He claim to fame was the Olympian laps he'd do from the kitchen, though the dining room, into the foyer hallway, back to the kitchen.  It happened every time we sat down to eat a family dinner. I think the record was 52 laps.

His first major illness was this year.  The poor guy went through a bad bout of GI distress. His vet, Dr K, sent him home with pills and diet suggestions. Zephyr did well, but was in more distress three days later.  We called our vet's office and the receptionist was shaken by the amount of screaming in the background.  (Remember, Iggy's protest the slightest discomfort!)  They called back a few minutes later and recommended Pepto-Bismol, which I administered using a jury-rigged insulin syringe. Miracle! The gassy pain was gone.

He didn't recover fully after that.  Pooping became more difficult and, due to his frailty, it was hard for him to balance.  We brought him in in to Dr K last month to assess whether or not it was Time.

Dr. K thought long about it, sizing up the skinny dog.  Zephyr was eating, still prancing, not suffering from kidney or liver problems. His heart heart now had a murmur (stage 4) that wasn't present the month before. He told us that, in his opinion, either decision would be the right on.  He also made certain we still had his cell number, just in case some concerned neighbor called about the "skeletal dog" in our possession. We opted to take Zephyr back home, and we put him on a wet puppy food diet.

I began to see him slowly degrade.  It started with his balance. He'd sway while standing, not that it hindered him.  He still jumped the last two steps leading to the yard, but he'd miscalculate and hit the metal handrail pole. Sometimes he'd miss everything and land with a wincing thud, flailing about on his side until he righted himself. We took to carrying him up and down stairs, and we put "bumper rails" around the low deck so he wouldn't walk off the edge.  He would accidentally roll off the bed, so we added a pillow on my nightstand to help him remain in place. We'd taken to feeding him by hand years ago, mostly because his toothless lower jaw didn't allow him to eat every last kibble. He was still eating, but he'd wobble and his feet would slide out from under him.

Sorrow kept us company the night before. Better Half cried himself to sleep. I cried when I knew no one was looking. Were we making the right decision?  Were we rushing things?  We didn't consider Zephyr an inconvenience. I think we both didn't want to let go because it would be letting go of the last bits of our beautiful past. We were so young and vibrant when Zephyr entered our world two decades ago. 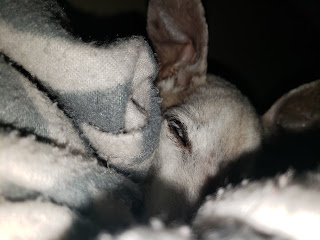 Nothing was different about this morning. We awoke the same way as usual.  I slipped a hand under his blanket to hold his paw.  He gradually shrugged off his blanket and sniffed the air. 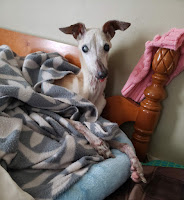 The world seemed surreal as we went through our morning routines. We kenneled Angus and Piper, and Zephyr turned his head towards us in anticipation of the same. Instead, we wrapped him in his cozy blanket and headed out to the truck. 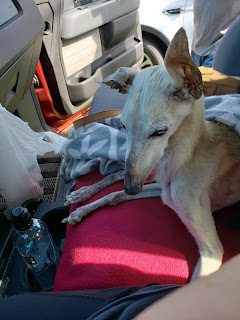 It's more than a thirty minute drive to the animal hospital.  Zephyr napped in his daddy's arms.  I pulled into the parking spot, and the boys got out. I took a moment to compose myself before joining them.

The procedure was painless. Dr. K is the sweetest man.  He assured us that we were making the right choice, that it was indeed time. He administered a tranquilizer and stepped out of the room.  Better Half and I took turns holding Zephyr as he got sleepy.  We softly cried, going through so many tissues.  When Dr. K returned, he allowed me to hold onto Zephyr during the final injection.  I was a vet tech in my early years, and so grateful for Dr K's trust in me. Our beautiful boy passed away in my arms at 10:20 AM.

We remained several minutes longer. I told Better Half to go ahead and leave the room. The most painful thing for an owner to see is a limp body.  I laid Zephyr on the table and slipped our wet tissues under his head before giving him several final kisses.

But Zephyr deserved a dignified death. He was a faithful companion.  He was a good dog. The greatest gift we can offer is compassion.  The ease in which he slipped away confirmed that it was indeed time, that we made the right choice, that he was ready to go. He was loved right up until his last breath, and we will continue to love him now that he's gone.

Our pack was down to two now. We haven't had so few dogs in decades. And, we were already in the process of finding Gus a younger companion.

We allowed our grief to momentarily consume us before finding our resolve once again. Life has to go on. I went to my cardiologist appointment, and then we hit the road. 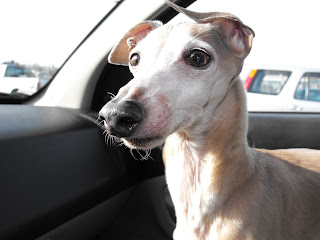 And now, the end is near
And so I face the final curtain.
My friend, I'll say it clear,
I'll state my case, of which I'm certain.
I've lived a life that's full,
I've traveled each and every highway.
But more, much more than this
I did it my way.
Our Dogs RIP Summer 2019