Today was Hershey's first visit to the vet.  His wellness exam is still on for Friday, but I've been worried about a UTI.

Hershey's first adoptive family had returned him for being "too excited".  One of the woman's other complaints was that he "drank too much" and "peed too often".

His odd "drink and piss a river" behavior continued the first week we had him.  There are plenty of reasons to not fret over it too much.  Puppy's don't have great bladder control; puppies wee when excited; puppies are just puppies. The length of the piss was rather long, however, and I didn't see any improvement.  He had also started weeing more often in the house.

I called to make his appointment but couldn't get him in any sooner than Friday. Determined not to let things brew, I asked if I could bring a urine specimen in before then. "Sure," they said.

Getting piss from a dog isn't that difficult. Males are easier than females. It takes quick hands and a tight leash.  I drafted Better Half into it this morning, since the sample should be as fresh as possible. (The alternative is to plunge a needle into the bladder - painful and expensive!) Half asleep, we both worked to coordinate the whole piss collection exercise, but soon Hershey was giving up the goods - albeit with some puppy frowning due to the weird sound of wee hitting a plastic cup held under him.

The vet's staff were bemused.  It's not often that an owner brings in a urine sample. It's even rarer for that sample to be contained in a specimen cup reserved for humans.  Bonus points for me writing Hershey's name on the label. The whole package was sealed with a plastic bag surrounded by a layer of ice inside a transport container.  They asked if I wanted to wait while they ran it.  Sure thing!

I noticed two sets of eyes staring at me as I sat down. "Are you kidding me?" quipped the owner of a very unhappy cat.  "How did you get that?"

My mind summoned up that humorous bit between Dr Grant and Eric Kirby from Jurassic Park III. "Be careful with that," warns the kid as Grant scrutinizes a sealed jug. "T. rex. It scares the smaller ones away, but it attracts one really big one with a fin."

It's not like Hershey was a 40' long, hollow-tailed theropod with an attitude... even if he acts like one sometimes. Really, the only thing I have going for me is my outdated knowledge from my time as a vet tech two decades ago.  Some shit just stays with you.

The tech came back with furrowed brows.  "Did you collect this from the ground or a stream?"

Oh yeah, it was loaded with bacteria.  I'd need to bring Hershey in, as he's a new patient, so they could look him over and prescribe an antibiotic.  Luckily, Dr. R had a cancellation this afternoon. No problem.


Poor Hershey. Having never been to the vet while in our care, he seemed eager to go for a truck ride.  And then I picked up the red folder that contained all his paperwork. His head drooped. This was it. We were obviously returning him because he wee'd.

Despite our reassurances during the trip, he spend it lying down with his chin pressed to the seat. No squirming. No pawing. He kept his hazel eyes locked on me. It was heart-breaking.

He forgot about his troubles once we arrived.  There was a massive maple tree to dance under, with raindrops pattering down through the leaves.  The front door had welcoming smells from other pets.  The vet tech cooed and stroked his fur, and gave him several treats.  A positive experience for any puppy. (It's always good to take your dog to the vet just to familiarize them. If the first time they visit a vet is to be neutered or spayed, the traumatic experience of owners vanishing to be replaced by techs with needles might put them off going to the vet in the future.)

I had only worked with Hershey a few times on the "exam" command.  Regardless, I murmured it to him as Dr. R. checked him over.  More praise. More love.  Hershey's wag stick was in perpetual motion.  Even the medicine-laced soft treat went over well with him.

We left armed with an antibiotic, heart worm preventative, and a soft chew to prevent flea and tick infestation. We also had some more input on his mysterious background: he might very well be a Lab Weenie - half chocolate Labrador and half Dachshund. (Better Half had a cuter name, but I can't recall it at the moment.)

"See, Hershey Kisses? We're going back to Forever Home!"  I smiled as the truck roared to life.

He curled up in Better Half's arms for the trip home, contentedly snoring once we hit the highway. The positive experience did wonders for him.  He is in his Forever Home. We will never give him up or give up on him. 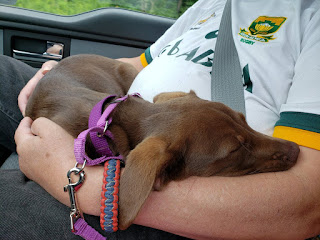