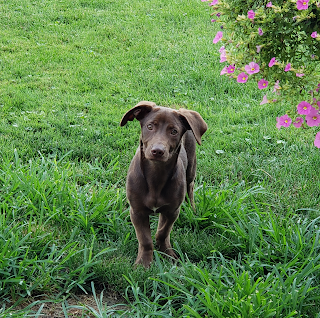 Facebook and Twitter folks have asked about the "hovering dog" picture.  No, Hershey can't fly.  He does love to break into zoomies when outside.

His original name was Hershey.  (We briefly changed it to Fritz but, after a day, it didn't feel right.) I spotted him last week while on a dog quest (finding a friend for Angus).

The Pet Adoption League had several pups, but it was a picture that stole my heart. His backstory broke it.

"Meet Hershey. This little nugget is about 4-5 months old and he’s a Dachshund mix. He was originally adopted out through us as a young pup but he became too much for the previous owners so now he’s looking for his new forever home. He’s the happiest little guy and so friendly. He is very active. He has tons of puppy energy and we are requiring he go to someone with a decent sized yard so he can burn some energy. He would make a wonderful running partner. He is still a pup so he can learn to get along with just about anything. If interested, stop on out to see him."

The shelter isn't open on Mondays or Tuesdays, so we had to wait until yesterday to pick him up.  Sadly, it was also Zephyr's last day.  We had conflicting emotions as we made the hour and a half drive through PA.  Were we doing the right thing?  Would the loss of Zephyr plus the addition of a pup be too much for Angus?  Would this little newcomer have a sweet personality to match Angus' own?

Our doubts vanished when we laid eyes on Hershey, and my concerns about his temperament were alleviated once we were introduced in the assessment room.  He was rowdy, as all puppies are, but he didn't have negative reactions when his toes, neck, bottom or mouth was touched.  I took away a bowl of food while he was gobbling, and there wasn't any aggression. He was able to quiet himself and focus for me.  Very intelligent pup!

The prior owners were elderly and, though the man loved him, the woman was upset because he was "too energetic".  She was overly vocal about it, according to the shelter operator.  Her complaints just don't match this dog's temperament.  Yes, puppies have boundless energy. Holy cow, they wear out toddlers!  But this little guy wasn't hyperactive.

Paperwork filled out, all the important things settled, and off we went.  He chewed his harness on the drive back, and nibbled on Better Half's hands a bit too much. The reason became clear once we arrived at Walgreens to pick up my dad's meds; Hershey dragged me all the way to the grass strip and proceeded to pee a river.  Good dog.

We decided to change his name today.  He perked up when I called him Fritz, and he comes to it. (Edit 7/5/19 We went back to Hershey. It's easier to growl when he misbehaves, and there are too many Fritz wiener dogs out there.)

Angus hasn't warmed up to him yet. He tolerates him. Hershey, on the other paw, needs to learn boundaries and that growls mean 'go away'.  They did well together this morning during training.  Hershey mastered the 'sit' and 'target' commands. We'll work on 'focus' and 'down' tomorrow.  Angus, who has been on a diet for several months, was so happy to have the extra kibble.

Housebreaking has been easy, though he's had a few accidents.  He's not signalling yet, but he will in time.  Puppies are little hydrants. They don't have bladder control nor do they know they have to pee until it just...happens.  It's best to take them out every hour, as well as the typical potty training routine: Eat - potty; wake up - potty; let out of kennel - potty.  It can be exhausting but well worth the effort.

Hershel is a very active dog. Most of my photos of him are blurry for that reason. He pesters and roughhouses as most puppies would.  This will wane with age and positive reinforcement.  Neutering will help tone things down as well.

Hershey will eventually figure out that Angus is a therapy dog.  Our jaunty black chidoxie has a job to do.  I'm wondering if he'll teach Hershey how to detect Better Half's needs, especially how to signal when Better Half is about to black out.  Angus also responds to PTSD/anger flare ups.  Better Half's mental health team was more than happy to write a letter explaining the need for Angus to be with his daddy. It's essential that Angus has the freedom to work without having to worry about some chocolate goofball getting underfoot.


He's entertained himself with Nylabones and toys all day, when not playing with us.  Man, we have a lot of dog toys in this house.  (I call them guilt offerings.)

Hershey's breed is still a mystery. He's definitely got Dachshund in him.  I'm thinking he might have some Visla genes.  He has some of the physical traits.  Better Half thinks he might be part Weimaraner. It's possible, though Hershey is the color of milk chocolate rather than grey. Both Better Half and I always worry about Pit Bull genes (we had a Pitty back in the day) given how many of these dogs are out there, but I honestly don't see it in him.

His feet are massive compared to Angus', and both of them are roughly the same size. He already outweighs Gus as well.  Maybe we'll have a hulking brute; maybe we'll have a really bulky lowrider.

Anyhoo, if you're looking for a pup or kitten (or even a pig or goat), I highly recommend the shelter Hershey came from.

The Pet Adoption League is a small but mighty shelter located just east of Pittsburgh, run by animal lovers. They are a no kill shelter dedicated to finding the right home for every animal in our care.

Their dedicated staff does a marvelous job.  Though we did not enter the cat area, the dogs we saw were cared for, healthy, and friendly.