LESSONS FROM MY DOG: Overcoming 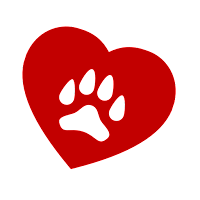 Our environment and experiences guide our actions. This process is hardwired into most animals as a form of preservation. The more potent the lesson, the more likely it is to be remembered.

Gus was found waddling downtown Steubenville with his litter. A young man packed them up in a box and brought them to the humane society.  He couldn't find the mother, and feared he hadn't caught the entire little.  It's possible that the mother was struck by a car.

That moment of separation touched Angus' life, a bit of baggage that he still caries with him even if he can't remember the event itself.  To this day, Gus backs away if you reach out to pick him up. He frets if anyone in his environment cries, shouts, or expresses pain.

It may also account for his fiercely protective nature, and may be the reason he's sensitive to Better Half's medical needs.  Angus' has adopted the role of protector and comforter. 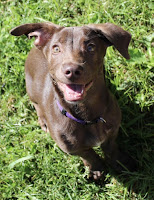 I've wondered about Hershey's own past.  We were told that he was returned by his first adoptive family for "drinking and peeing" too much.  A trip to our vet solved a bit of that (UTI infection).

Despite the experience of rejection - and probably much shouting by the woman that loathed him - Hershey remains an upbeat and trusting dog, eager to please and happy regardless of the situation. He impressed our vet with his intelligence and ability to learn new tricks (every owner should teach their dog "weigh in" and "exam"!)  He loves to cuddle. He loves to be in physical contact with us while he sleeps. The only baggage he seems to carry was a bit of separation anxiety.

Perplexed by his good nature, I asked the Pet Adoption League about his past.

"Hershey came to us from a little town called Hyndman. A family there had outside dogs. One had a litter of pups. It was cold and they tried to heat the dog box with a light bulb. The box caught fire and all but Hershey perished in the fire."

The news broke my heart. I can't imagine being in that position, helpless and unable to break away the walls as the world snatched the breath from everything I know. To hear them cry and then go silent.  Animals experiencing that traumatic situation tend to be shy, or wary of flames and smoke.

I scooped Hershey up to hug him, but he wanted none of it. Instead, he furiously wagged his tail and licked the tears from my face. Hershey Kisses are the best kisses.

This is a dog that didn't fuss when the city's fireworks display rattled our windows; that didn't blanche when the vet gave him his Lymes disease shot; that jumped off the bed and hurt his paw, and stood silently with it raised, looking to me for comfort.

It's a potent reminder that we all have baggage, but how we react to it makes all the difference. His separation anxiety is trivial. He could have refused to trust anyone. Dogs don't have the cognitive ability to compartmentalize baggage in order to unpack the negative from it. In his case, he chooses not to act based on traumatic past events. Every day is a new and promising day for Hershey. He embraces that.

And us.  And especially Gus. 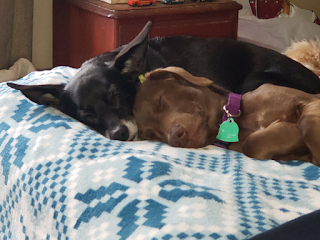