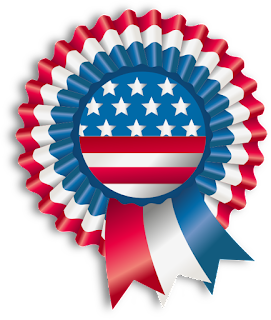 If you tell a lie big enough and keep repeating it,
people will eventually come to believe it.
The lie can be maintained only for such time
as the State can shield the people from the political,
economic and/or military consequences of the lie.
It thus becomes vitally important for the State
to use all of its powers to repress dissent,
for the truth is the mortal enemy of the lie,
and thus by extension,
the truth is the greatest enemy of the State.

The 2020 campaign promises to be insufferable right up to election day. We can all expect to be inundated with calls, texts, and mailings regardless of our party affiliation.

Although beneficial to voters, this practice actually annoys me. You can conceal dog poop in a fancy gift bag festooned with glittery ribbons but, regardless of how promising the presentation, it's still a bag of shit.

Such is the case with the campaign fundraising letter I received yesterday. I'm a Republican. Lucky me.

Clever marketing went into this round. I'm actually impressed by it. Kudos and a golf-clap to Ronna McDaniel and her RNC marketing team.  The material subtly slips in rhetoric disguised as core beliefs.  The content is a patriotic hodgepodge of guilt trips and Plasticine promises all while preying on a conservative's fears.

To put it bluntly: Trumpist (not Republican) Propaganda.

Propaganda is information, especially of a biased or misleading nature, used to promote or publicize a particular political cause or point of view. Tactics are hard to see, especially if the targeted person already holds prejudices against the opposition.

The letter arrived with an official-looking questionnaire titled, "2019 Congressional District Census".  Despite the RNC's chosen approach, this "census" is nothing more than a fundraiser in disguise. More on this later, once I've had time to scan and upload the document.

Preparing fore the 2020 Presidential Election is going to take a massive grassroots effort all across America.

That is why, as the Chairwoman of the Republican Nation Committee (RNS), I am very concerned that you have not returned the 2018 CONGRESSIONAL DISTRICT CENSUS DOCUMENT that was registered in your name and sent to you at the request of President Trump.

Ms [reacted], I am sending you another copy because your registered Census was one of the select few mailed into Ohio's 6th Congressional District.  Enclosed is your official 2018 CONGRESSIONAL DISTRICT CENSUS DOCUMENT registered CODE #N19PX108 in your name as a representative of Toronto.

[I actually returned the original census document. I did not include a donation.]

This is the largest Congressional District Census our Party has ever taken for a Presidential election. Your completing and returning your 2019 Census Document is central to our ability to device a winning Republican strategy in your area as we prepare for President Trump's re-election.

Our research shows that the nationwide Congressional District Census that we are conducting is helping the RNC put together the critical information and voter profiles needed to target audiences with the truth concerning President Trump's agenda. Now that control of the White House - and our entire government - is at stake, your personal involvement in our 2019 Census Project is more important than ever.

With our nation so politically divided and the Democrats and mainstream media constantly spreading fake news about President Trump and his administration, it is difficult to get the real facts about his agenda out to Americans all across the country. That is why it is so urgent that you return your Census Document immediately to me here at RNC Headquarters.

[Propaganda Marketing Tactic 2: Divide and conquer. Were I in charge of this, I would initially break responses into three categories: Pro-Trump Republicans, Swing Republicans, and Anti-Trump Republicans. I can fine tune propaganda to appeal to people in each category. The Pro-Trump and Swing Republicans would also go on telemarketing lists. We can count on one for donations and sway the others with discussions scripted to appease reservations. BUT this "census" isn't actually going to be used. It's disguised as a fundraiser.

Propaganda Marketing Tactic 3:  Obfuscate and confuse. Disclaim negative reviews while also presenting them as fallacy. Never admit that your candidate or party has flaws. Buzz words like "fake news" and attacks on mainstream media are familiar tactics. You need to convince people that what they hear is not what actually happens. Cast doubt whenever possible while keeping your message on point and unchanging.]

Ms [redacted], your participation in this national effort will provide us with the detailed data we need concerning Ohio's 6th Congressional District. Most importantly, it will show the Liberal Democrats in Congress, the radical special interest groups, and their Left-wing allies in the media that the American people support President Trump and want to advance his legislative agenda.

[Propaganda Marketing Tactic 4: Draw the targeted audience in by making them feel that their participation is part of the war effort, and that the candidate must be supported to avoid the loss of privileges/rights/freedoms/morals.]

So please, act today to complete your 2019 CONGRESSIONAL DISTRICT CENSUS and do your best to get it back to my at RNC Headquarters by July 26th.

At the same time, please include a generous contribution of $25, $50, $100, $250, $500, $1,000, or whatever you can send to help underwrite the costs of this project and enable us to enhance our voter outreach, strengthen our grassroots operations, better deliver our message to all Americans, and re-elect President Trump and Republicans at all levels of government.


I'm making this special appeal for your financial help now because President Trump cannot win re-election and continue to make major progress with his efforts to Make America Great Again as long as the Democrats and the Liberal media misrepresent his message and hold his Presidency hostage. It is absolutely vital that we have the funds to battle back.

[Propaganda Marketing Tactic 5: Convince reluctant people to fund it.  The bold face text is a visual cue to reinforce the prior statement while adding the possibility of negative consequences if the targeted individual does not follow through. This trick is most commonly seen in scams, such as Publishers Clearinghouse. "You don't have to place an order but, if you don't, you won't be a finalist in the special drawing!"]

With the Democrats in control of the U.S. House, and with more than twenty Liberal candidates lining up to challenge President Trump, he is going to be under even more brutal non-stop attacks. They will try to bring all of his accomplishments to a screeching halt, block legislation in Congress, hold up Presidential appointments, work relentlessly to stop us from doing what's best for America - and set the stage for them to capture total control of our government so they can enact their Socialist agenda.

[Propaganda Marketing Tactic 6: Prey upon people's fears.  Many Republicans have not yet looked into the Democrat candidates. This marketing approach is an unwarranted scare tactic designed to rile up the base.]

Chuck Schumer, Elizabeth Warren, Nancy Pelosi, Kamala Harris, Alexandria Ocasio-Cortez, and their Left-wing, Socialist cohorts are determined to put their radical, costly, and destructive politics first - ahead of the good of our country.

[Propaganda Marketing Tactic 7:  Remind people that one thing is worse than another. This is aimed at Republicans that might be considering a Democrat candidate. Words with negative connotations are a potent propaganda tool.  "Radical", "Costly", "Destructive".  "If we have to choose the lesser of two evils, we should vote Trump because the others will destroy America!"]

As Chairwoman of the RNC, my top priority is to make sure we have the organization and the funds to stop their efforts to change our nation into a Socialist country by ensuring Donald Trump is re-elected the 45th President of the United States.

[Propaganda Marketing Tactic 8: Speak from a position of authority, then rinse and repeat. Propaganda works best when heavily hammered.  You want it to stick in the target's mind. You want them to embrace and repeat the "fear" rhetoric. The phrasing changes slightly but the content is exactly the same, as you'll see in the next few paragraphs.]

To do that the RNC must invest in opposition research, voter outreach, Party expansion, and grassroots organizing. And we must have the funds necessary to use the latest technologies to execute our campaign plans and get our Republican message out to ALL Americans.

President Trump cannot succeed, nor can our Party prevail over the challenges the Democrats will constantly present in their efforts to divide and destroy our great nation, without the input and support of dedicated individuals like you.

Ms [redacted], the fight to re-elect President Trump has begun. We must begin funding the powerful grassroots operation needed for the Presidential election and be prepared to work for every vote in the races all across the country - including contests in Toronto.  If the Democrats win this battle, it will prove disastrous for America's future.

Please stand with us - let me hear from you by July 26th.

P.S. Ms [redated], President Trump very much needs your commitment and support today. As a registered participant in our 2019 Congressional District Census Project, you are on the frontline of the battle to stop the Democrats from turning our nation into a Socialist country.

So please, I urge you to help the RNC build the grassroots organization we will need to re-elect President Trump by completing your 2019 CONGRESSIONAL DISTRICT CENSUS and returning it with a generous contribution of  $25, $50, $100, $250, $500, or even $1,000 in the enclosed envelope. If you would like, you may go online to www.GOP.com/Census and get your donation and survey responses to us immediately. Thank you.

All parties are guilty of spin and rhetoric abuse. Democrats, Libertarians, Republicans. It happens. However, all of it pales in comparison to Ronna McDaniel's letter. It couldn't Goebbels any harder if it tried. (Easter egg: the quote at the top of this article is attributed to him.)

The 2019 Congressional District Census itself is part of the RNC's fundraising efforts. Due to the document title, some recipients mistakenly think it has something to do with the United States Census Bureau.

The 2019 CDC contains five sections with several questions per section, four pages in total.  The entire thing is yet another marketing tool.  Input by clueless masses allows the marketing firm to fine tune the propaganda. As mentioned previously, I'll upload it as a pdf once I scan it.

Here is the Census preface:

2019 CONGRESSIONAL DISTRICT CENSUS
As a key facet of our overall strategy to ensure President Trump is re-elected, the Republican Party is conducting a Census of key members and supporters in the Congressional Districts all across our nation. The opinions registered in this document will be used to build a nationwide grassroots network that will help show that President Trump has the support of the American people to continue to move forward and act on the critical issues facing our country.

The questions range in value.  Examples include:


Do you believe the national media has a strong bias against all things Donald Trump and Republican and fails to tell America's voters the real facts about Republican policies, principles, goals, and accomplishments?

Do you think "political correctness" had gotten out of hand?

Do you think the Democrat Party as a whole is promoting a Socialist agenda for America?


Basically, is our propaganda working for you?