WINTER: An Adventure Every Day 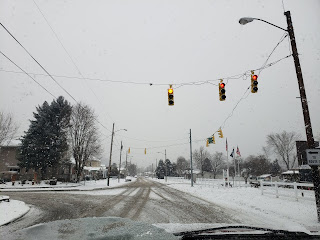 The roads were insane today.  The city plow hadn't returned by time I left for my appointment. Though in the truck and using 4-wheel drive, I fishtailed down the alley, into the turn, down the main street, and up the road to the state highway.  There the road was plowed, but only one lane.  It was clear enough to do about 50mph in a sedan.  The problem was all the motorists doing 20mph.  This forced the rest of us to drive in the deep slush in order to pass them.  The result was a spin-out for most, or smacking the barrier between both sides of the highway.

Total car and truck graveyard. Way too many pissed off, stranded motorists.

Seriously, if you are not comfortable driving during inclement weather, do us all a favor and stay the hell home. Going slow is safe but not when your speed is so slow that it impairs all traffic behind you, including semis trying to get enough momentum to make it up hills.

I had very little difficultly.  Yes, I fishtailed. Yes, I skidded. Sure, I almost became best friends with a ditch.  However, I hail from Colorado.  The salty mud on Ohio roads is far better for driving on than the "eco-friendly" chemical Colorado sprays all over their roads. But, most importantly, Colorado taught me how to avoid idiot drivers in the winter. So, after five minutes of being stuck behind an elderly woman going 15mph, I made the left lane my bitch and managed to pass granny.  Lots of fishtailing, lots of sliding, lots of "woo-whoo" and "get some!" masculine do-or-die shouting from me. I also managed to not coat her windshield with a rooster tail of slush and road debris.

Coming home was another story - mainly because it had snowed more heavily during that time.  Now the highway was littered with stranded vehicles, flashing lights, frustrated tow truck operators, and frowning cops. Yep, the entire highway had been plowed. Nope, none of those "accident" drivers remembered that bridges are icy even if plowed.

I sighed, went into survival mode, and made it home without a scratch.  It was an inconvenience rather than anything to get upset over.  Others have it worse than us right now.  Perspective is everything...

I can't imagine enduring this horror.  A house fire takes your dwelling.  It forces you to evacuate into the painful cold, and you have only your normal indoor clothing to wear.  Whatever possessions aren't burned too badly are now frozen solid from the water.  You've basically lost everything. My heart goes out to them, and to the firefighters working in the bitter cold.