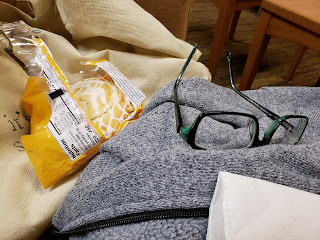 Today is Mum's surgery. It is, hopefully, the first day of her renewed life.

They scheduled her valve replacement and CABG for 8:30, though they recommended I arrive sooner. Mom woke me up at 3:15 to inform me that they wouldn't let her poop. The nurse called at 5 to tell me Mum was going early... can I be here at 5:30?

This early in the morning, nothing moves. Though the roads are wet from rain, the stretch of highway itself can accommodate speeds excess of the 55mph limit. I followed a highway patrol. He was doing 80. Obviously something was up somewhere.  I cruised at 70 and made it to the hospital in 15 minutes. Plenty of time to visit with Mum and give her a kiss from each of us.


Here I sit in the waiting room, in Better Half's sweats and a very wrinkled tee.

Michael the Chaplain found me a few minutes ago. I paused blogging/fam updating and we offered up a prayer.  He remembered Dad.

I suppose I'll eat my Danish and then take a nap. It will be 5-8 hours before Mum hits the recovery room.


UPDATE
10:30
No news is always good news. I had a nice nap, found a cheap book in the gift shop, and was given a free meal.

Meanwhile, the boys are being weird. I know their not trying to. But what is up with ignoring instructions?

I am not my mother. I don't leave a litany of things they Must Do Or Else.  I left them with One Important Thing: verify with Dr. Miracle that dad's "same as last week" blood thinner is what actually matches what's been dictated over the phone to me by Mum. It's not rocket science but it is critical enough that fucking it up could kill him. He calls in his INR each week for that purpose.

He didn't write it down?! Put Better Half on the phone.

"They said to keep it the same as last week," says Better Half.

He calls back. He gives me an incredibly high 2.5 for those odd days. Mum was adamant when she explained that he gets less than 2mg on those days. I don't doubt Jeff. I doubt the records. Dads dosages are never correct in the Trinity system.

There was half a pink pill in the case last night. I ask him to look at the bottles to verify what mg it is. We can then figure out the math. He balks.

This is on top of dad refusing to bathe for a week. As I explained the day before and today, Mum will be in "cardiac ICU" (CVU). The natural fungus and bacteria that colonize our skin is very high on him. I don't want cross-contamination.  This is why they advise patients in Mum's condition to bathe daily.


I can only control one hazardous situation. Dad can't visit if he doesn't shower. The other situation... well, it's Friday. Dr. Miracle closes early.

*sigh*  a search on Google reveals that pink are 1 mg. Nowhere is there a "grey" pill. This doesn't help me other than to confirm that he took .5 last night. I hope to God that's right.

Meanwhile, I missed her surgeon, hereby dubbed Dr. Kind . Now waiting to speak with him. Mum's surgery is done.


UPDATE
1200
Mum did well. Dr. Kindly only had to do one bypass. Mum also  now has a tissue valve rather than the dreaded mechanical.


UPDATE
2 PM
They've transferred her to the cardiac ICU (CVU) to recuperate moment by moment. She'll be here until discharged to skill nursing for rehab. 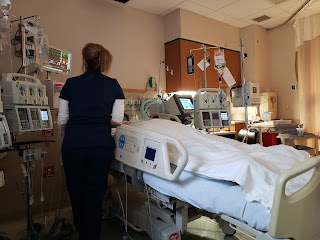 It looks more frightening than it is. Actually, her face has a beautiful glow now, one I haven't seen in a decade or more. She looks fantastic.

They'll keep her tuned and with a pacemaker for a few hours, and she might be sedated until tomorrow. This is to prevent not only post-op complications but also to keep her comfortable so she doesn't squirrel around. A nurse will sit in the room and monitor her overnight.

Dr. Kind, who was on his way home, caught me as I was returning from the gift shop.  He was kind enough to let me use the employee-only elevators and helped me slip through every shortcut requiring a badge.

He isn't too worried about her current status, but he is eternally cautious. He checked her vitals because he was there, then ordered a bit more nitro. I'm glad Dr. Miracle referred us to him. The expertise honed at the Cleveland Clinic is an asset to the people out here but it's Dr. Kind's professionalism and compassion that make him worth his weight in gold.