Yesterday was better. We visited Mum.

She was still very weak, and she didn't like the fact that they were pushing her to work harder than she wanted.  I explained to her that she was going to be pushed. She has to do the exercises in order to grow stronger and avoid complications.

"I know my limitations," my mother sighed. "They are pushing too hard."

I sigh.  We leave, and then head over to our favorite Christmas Eve Chinese restaurant.  It's a BH and GC tradition.  This time, we were able to bring Dad.

He doesn't get much opportunity to eat at restaurants these days. I think it was a welcomed reprieve from the daily drudgery.  He even refused to use his wheelchair, preferring to walk in under his own power.

We found a booth, and then talked about his time in Korea (government contract, not the war.) I texted Aunt Honey and the cousins to share the latest update.

Which reminds me - when I cleaned up posts from this blog, and transferred a few political ones over to GCP, I think I lost the four entries that cover their trip here last summer.  It was filled with pictures and memories.  Sadly, I don't even see drafts.  I'll give the Wayback Machine a shot later; I doubt it would pay any attention to my work anyway.

I had a burr in the saddle by time we arrived home. My fatigue didn't matter. My mind was filled with worries and racing thoughts. I had to occupy it. The effort kept me up past midnight, but I  cleaned the entire downstairs, put up a tree, did some of Dad's laundry, and organized items for the next morning.

On to Christmas Day! 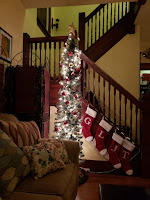 Better Half's non-essential tremors kept me awake until 6 AM this morning. I slept until 10 AM, so we didn't get the duck in the oven until 1.  I became swamped after that. Gone was my idea of eating a Christmas lunch before going over to visit Mum.  It had turned into a Christmas dinner.

In the final moments between pulling the duck out of the oven and waiting on Dad to come downstairs after his shower, I opted to go smoke on the back deck. Yes, I had quit. I did well for two months. That's just how heinous the stress is right now.  I put in a call to Mum to let her know that we would be there around 6 PM.

Sedated?  Did she go loco on people?  I entertain a few mental images of my mother (now warped into the shape of a hospital gown-clad rhino) charging the halls while brave aids and nurses attempt to blow-dart her back into submission - it brings a momentary smile to my face.

"After the scope," the aid continues, "Because Dr. No [the doctor Mum doesn't want because his was aggressive in his treatment plan for her lung cancer a year ago] pulled the mucus plug."

The what?  The image of the rhino vanishes. Left in its place is the sad flashback to when I had come upstairs after her recovery. Intubated and hooked up to every machine possible, she looked both frail and fierce.

The aid, unaware of my crestfallen facial expression, continues, "We called earlier and spoke with her husband. He said you weren't available, but you'd call. We've been waiting for you to call."

Okay, now I'm miffed and worried.  First of all, check the damn chart. It says in bold print that they need to reach out to me.  They have my mobile number.

You see, they had called to tell Dad about the need to scope her, and he forgot.  He has Parkinson's and is in the early stages of Alzheimer.  He doesn't retain much.

The nurse comes on the line to update me.  Apparently, Mum's breathing didn't sound right to Dr. No.  He wanted to do the scope to determine whether or not mucus had formed where it wasn't supposed to. The plug was pulled out and, during her time under anesthetic, Mum's heartbeat was too slow. She's back on the pacemaker, and the tracheal intubation keeps the lung clear.  The sedation keeps her from discomfort.  Dr. No will assess in the morning, though her tube will probably come out around midnight.

I ask if she was in any danger.

"No," says the nurse, "This is routine and she's doing well now."

I listen as she rattles off the data. Alright, pressure is good. And the oxygen saturation was in the low 80s but is now back where it needs to be.   Satisfied with what I heard, I thanked the nurse for taking good care of my mother.  Then I rounded on my father as he came down the stairs.

"Dad! Why didn't you tell me the hospital called?!"

"I forgot," he sheepishly admits. "I couldn't understand what the nurse was saying. Her accent."

Actually, she does have a difficult accent. She's Asian - this petite ball of boundless energy and good will - but her pronunciation of medical terminology can be confusing, especially when she's rattling it off to someone who has not clarified with her that he can't comprehend what she's saying.  My Dad is a smart man, and an overly polite man.  He had thanked her and told her I would call.

And then forgot to tell me, as I mentioned above.

Now I'm filled with unbridled guilt. Had I known about the procedure, I would have dragged the menfolk to the hospital - Christmas dinner be damned! Even now, my heart is aching.  Did Mum expect us to be there?  Was she deflated when we didn't turn up?  Was she scared? Will she wake up tomorrow and feel abandoned?

I can't be angry with my Dad. Forgetfulness isn't his fault. Also, Mum has no concept of time.  Chances are high that she'll forget this is Christmas week. 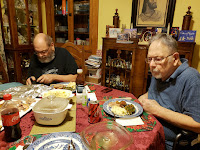 We settled down to a simple meal, and I texted the family to keep them apprised.

Do you see that stack of papers and boxes behind Better Half?  That's our filing pile.  We really need to transfer some stuff around. This house has at least 4 filing cabinets, and all are filled with documents that nobody needs to keep. Paid utility bills from 20 years ago, a copy of a title for a car no longer owned, tons of medical records, all Mum's scripts, etc.

I am not ashamed! Actually, I'm curious about how high we can make that pile before it topples. It's using a Jenga filing system.

After getting Dad comfy in his chair, and putting some key lime pie at his elbow, I opted to excuse myself and head upstairs.  We still haven't been able to reach Better Half's parents or brother.  That's just another worry on our minds.

I'll call the hospital at midnight to see how well Mum's progressing. I know she had hoped to spend only 5-7 days at Trinity West, and then come home to recuperate instead of staying at Trinity East. At this point, I think her best option is to go to skilled nursing so they can push her like she needs to be pushed.  She can't simply come here and then not do what she's told to do by the occupational and physical therapy staff.  If hospitalized, they have a better (and easier) chance of getting her to do the work.

But that's the future. We'll focus on the Now. One day at a time. Moment by moment.
Mum and Dad Reflections Winter 2018-2019