INDEPENDENCE DAY: the physics of the humble paddle ball

Today we celebrate Independence Day, which has its roots in the American revolutionary war. It was a push for freedom and democracy - the desire to be independent from Great Britain - that allowed our nation to thrive.

"Push". It's an odd-sounding word with so many interpretations.

You can push something or someone away, such as bodyguards pushing paparazzi from a star.  You can push yourself away from something, like a reporter pushing off the wall move forward again. You can push forward, and in fact push or shove the bodyguard to the ground. And, of course, that bodyguard might be pushing his age thus he snaps his hip when he hits the pavement. You might want to push some narcotics on him at that point - or pray you haven't pushed the other bodyguards to emotional breaking point. In their frustration, they might push for the police to arrest your sorry ass, and that's when you'd be pushing your luck.

To define "push", we must also consider its opposite, "pull".  Pulling is attraction. Pushing is repulsion.  If a pull is a force towards that which is pulling, a push is the force away from that which is pulling. It these two forces are balanced, we see equilibrium - the cancellation of forces acting on an object. 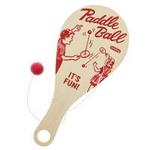 Consider the humble paddle ball toy:  a small wooden or plastic paddle that has a rubber ball attached to its center by an elastic string. Technically, it's a spring with a fixed end.

The game is equally simple: strike the ball with the paddle in succession as many times as possible.  A successful player has quick hand-eye coordination and the ability to find equilibrium.

The game's complexity stems from ordinary physics.  The elastic string is key.  Though the player induces a force oriented opposite of the ball's displacement from equilibrium - thereby determining distance from paddle -  the string is the love that keeps ball and paddle attached, the element that allows the ball to return, and the variable which affects each circuit the ball makes.

Reddit user That_There_Is_a_Bear kindly broke it down for us several years ago:

"The elastic band induces a force oriented opposite of the ball's displacement from equilibrium. The force you put into the system to make the ball bounce could be modeled by some harmonic forcing function, like F_0 Sin(w_0 t), with w_0 being your angular frequency, and t being time. F_0 is the initial (and assumed constant) force that you apply. So we can set up a differential equation to try and model this motion. I'll assume any damping factors are negligible. We have,

So, in the absence of damping (or energy loss), resonance occurs when your applied frequency matches the frequency of the ball and paddle: w = w_0 .

This constitutes as harmonic motion, and you could probably do away with the forcing function term if you wanted, and just considered the ball and paddle system alone. You could use conservation of energy if you assume energy loss is negligible, but the ball is hitting the paddle over and over and that will result in energy loss. Hence, you need some kind of external forcing function to continually transfer energy to the system.

Conservation of momentum could be used if you disregard your external force, and the force imposed by the string (F=-kx), but this doesn't help you much. However, you could consider the string to be a "physics string", and be massless.

To make things simple, you could consider the analogous situation where a ball is bouncing up and down without energy loss. In this situation you could use energy conservation."

All that aside, how many of us have a childhood closet stuffed with broken paddle ball games? Our pushing force is so strong, so repulsive, that an object can not recover.  Equilibrium goes out the window.  The band snaps in the middle or at one end, and the ball sails away.  The gravity of the situation takes hold, bringing the ball to the ground. Now independent, it bounces under the couch and vows to never become attached again.

This applies to many things in life. In a relationship, you sometimes push a person away while trusting that they will return. Maybe you push to see if they care enough to pull you back. If repulsed too hard and too often, the love snaps and the person does not return. Likewise, too much parental pressure on a child might give them cause to rebel.

What does any of this have to do with Independence Day?

If you push anything hard enough - be it a ball, a person , or a colony - that which tethers it to you might break.

The colonial revolt that took place between 1765 and 1783 was the mother of all paddle ball games, singularly based on Britain's need to control trade in the colonies.Equilibrium was lost by time the Stamp Act Congress met to gripe.   Each consecutive British swing - from Townshed Acts to the Intolerable Acts - had pushed the colonies hard. The Boston Massacre, the burning of the Gaspee, and the Boston Tea Party were some of the results. The ties grew taunt and then snapped.


During the second year of the revolutionary war, on July 2 1776, 13 representatives from the North American colonies of the Kingdom of Great Britain voted for independence from the crown. Two days following the vote, the Declaration of Independence was signed, and the United States of America came to be.

The war didn't end once the tether snapped. It raged on for several more years. However, the colonies were now independent.