Showing posts from June, 2018
Show all

PINTO (AND OTHER CAR) MEMORIES 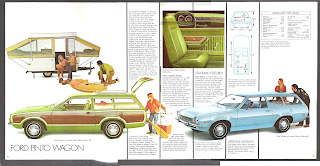 Oh my lord....Pinto memories! My childhood car, the first car I learned to drive.

I honestly can't recall what year we purchased it new. I believe my Dad chose the "Squire" option.  I don't think it had wood paneling but I could be wrong. The exterior was white. Stick shift, no AC, but an 8-track player.

What stands out the most in my memory is the avocado interior.


My mother had a Buick Regal for the longest time. It got us from CA to CO.  It looked somewhat like this:


After that, it was a hodge-podge of land yachts until they finally settled on the Mercury Sable.

Hrmmm.  My first official car was a '78 Chevy Nova.  I loved that thing. Sadly, we sold it for far less than what it was worth. I wish I had held onto it.


Our first car as a married couple was a Jeep Grand Wagoneer. Another classic beauty that I regret selling.

And then we went through two brand new Vues.....


...Before trading the last one in for a Nissan Pathfinder. That's when we started gettin…
Post a Comment
Read more

Dad is finally home. It's good to have him back though Mum has been a basket case all night due to exhaustion.  Now nearly 1 AM, and I can sit down and relax before bed.

We killed two birds with one stone today. Dad shouldn't be driving anymore and neither BH and I find his old Mercury Sable comfortable to ride in (or drive). It's a good little car but it's not very accessibly for people with disabilities or limited mobility.

We stopped at the dealership on Friday.  The initial plan was to trade it in for a Town and Country minivan.  The problem was not only the cost (compared to the vehicle's age) but also us footing three car payments (truck, Caliber, and newest car).  Team Automotive came to the rescue once more.


Our salesman, Frank, didn't like the fact that we were paying on a lemon (Caliber), and didn't want to saddle us with future problems found in most used cars.  He worked with the finance team and his manager, and called us on Saturday to let us …
Post a Comment
Read more 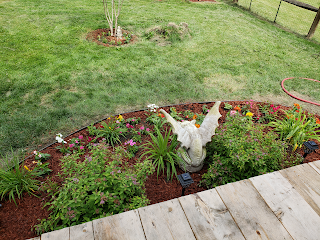 Schmedly the Gargoyle finally has a new home.  He adorned an exhibit at Phipps Conservatory before we purchased him in 2009, mossy patina and all, for our own Pembroke Cottage garden. Now surrounded by freshly planted greenery, he stands watch over the alley.

The new back garden bed took a long while to complete. BH and I aren't spring chickens - the only thing we're good for is soup these days.  What was to be a weekend project turned into a month-and-a-half saga of digging, whining, more digging, and frustration. The grass (two layers of sod atop each other) was indeed our biggest nemesis.

We finished it (and dropped in the first two bushes) the day my father returned to the hospital. Mum and I stayed a week at Family House Neville to be close to him in Pittsburgh, and that put the gardening off for a while.  I resolved to complete it before Dad returned home. After all, we have a deal: I promised him that the plants wouldn't die before he returned, and he promised not t…
Post a Comment
Read more 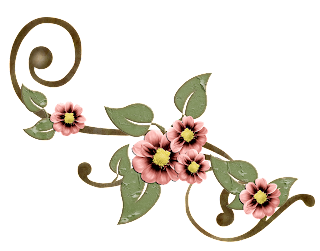 Longtime readers probably remember my occasional foray into the realm of entomology (not to be confused with my passion for etymology). It's been a while since I've felt motivated enough to look closely at nature's unexpected critters. After all, we didn't have too many guests before we started gardening at Toronto House.

A lovely grapevine beetle was one of our first visitors this year.  Might as well document him here and add the observation to iNaturalist.

Greyhound Dogs: The Second Race | The Brothers Riedell Have A Field Day 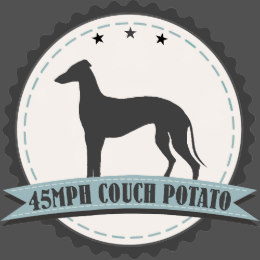 A reminder for those looking for the perfect pet: you can't go wrong with a retired racing greyhound!

"The Brothers Riedell, YouTube filmmakers, wanted to spotlight these  friendly and beautiful dogs and shed light  on the organizations and individuals  who are fighting to give these dogs a second race in life."

For those out of the loop, my dad went to the ER yesterday. He was behaving oddly - more confused than normal, unable to walk, a bit weak on the left side. His neurologist (well, mine, technically) insisted on an MRI. It allowed her to diagnose bleeding in his brain.

They sent him up to Allegheny General to the neuro ICU (via Life Flight - he was so excited and nervous about the flight).  It was critical that they take him off his thinners to stop the bleed, thus he would require better monitoring than what's available in Steubenville. The risk of stroke is very real, but we're hoping for the best and keeping positive that things will turn out all right for him.

Mum and I are staying at Family House Neville. It's a lovely and comforting facility.  Alas, no photographs - wifi is free, but limited.

We'll head over to the hospital in the morning.  Tests are on the schedule, but we won't know more until we speak wit…
Post a Comment
Read more 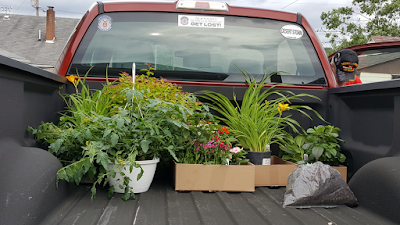 We made the journey to Lewis Country Gardens in Calcutta this afternoon, but nothing really jumped out at us.  It's better to visit them in the spring, perhaps.  The selection will be larger.

Having some time to kill, we next drove past Paris and stopped by Iannettis. We were not disappointed. Though too late in the season to find a large mixture of perennials, we did pick up different varieties of daylily, a small shrub, some heliotrope, and other assorted annuals.  They also had a lush tomato hanging basket.


Afternoon and evening rain kept us from doing much in the yard.  I snipped the iris to liberate three hosta (these will all be transplanted), and Better Half finished a bit of grass removal in the main bed.

I'm afraid I won't get much more done this season. My kidneys are flaring up - stones or an infection, can't tell - so movement is extremely painful.  I've been sucking up the pain just to get things done but I think it's about time I made a trip to …
Post a Comment
Read more 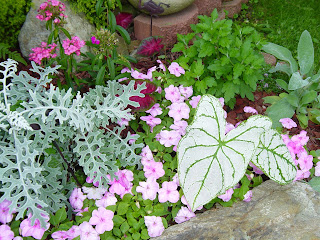 Better Half has returned from MER SAR College.  Nothing left to do tonight but relaxing and pondering where we'll start our plant quest.  It's late in the season, but not too deep into the hot months.  Our aim is to recreate what we had on Pembroke.

My garden on Pembroke existed due to three sources: Iannettis Garden Center, Ferda's Garden Center, and Phipps Conservatory. The conservatory served as inspiration, but the garden centers made the dream possible.

Gardening became my passion.  I was damn proud of my green thumb, and of the yard I painstakingly crafted. I spent more time photographing it than I did working in it - which is to say I did nothing but embrace nature from April to November.

I haven't had the opportunity to garden since 2014. Sans therapeutic activity, I've found myself slowly withdrawing.  This year, finally, we've worked to turn the lackluster back garden (lawn and more lawn) into something pleasant to the eyes, ears, and nose.  The main…
Post a Comment
Read more

RISE OF THE YELLOWJACKETS 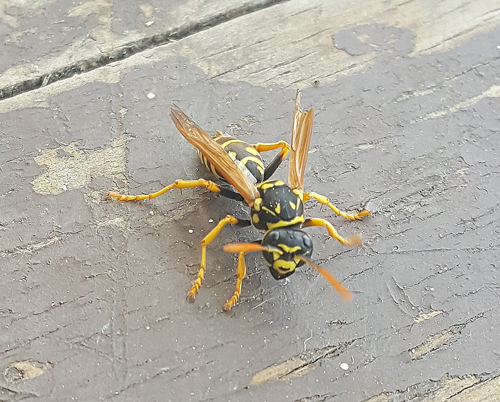 Hrm.  There are holes in the grass that look large enough for a small rodent's burrow. Must be Eastern Yellowjackets.  I'd suspected them for a while.  I finally had proof the other day.


Presenting Elvis - aka a male Vespula maculifrons.  He landed on the back porch.  The cooler temps had taken a toll on him that day.  All the better for me, as I'm allergic to venom and these little assholes are aggressive stinging menaces.

It didn't help that Truffle and Piper kept dicking around with him. Nobody appreciates a wet dog nose dabbing your body into a wooden board.  Though he didn't protest too much, I didn't want to take a chance. I used a garden glove to nudge him towards a gap in the boards.

V. maculifrons take nest defense to a whole new level. They won't nail you just once. Nope. They don't lose their stingers, and they are capable of delivering venom repeatedly until you abandon all hope and flee the area.