I watched the Royal Wedding between Prince Harry and Ms Meghan Markle out of my love for ceremony.  That ceremony was exquisite. The Queen's attire summoned to mind the reawakening of spring. The men appeared equally noble. Prince Harry's smile almost took his ears at times.

My favorite, however, was Doria Loyce Ragland, the mother of Meghan, (now) Duchess of Sussex. This woman's poise and humility outstrips that of many of the bluebloods.  She sat alone, her ex-husband having suffered a heart attack earlier this week, across the aisle from the Queen.

Both women wore similar shades. Doria opted for a pastel green Oscar de la Renta dress and coat. The Queen chose a flared dress in lime, lemon, purple, and gray floral printed silk topped with a lime silk tweed coat. Both are by Stuart Parvin. Some news sites have speculated that the Queen chose these colors to send a message: green for health and fresh beginnings, and purple to indicate her approval of an American into her family.

With regard to positional seating, both the Queen and Doria occupied the same level and seat on opposite sides. It speaks volumes.  Doria is an American yoga instructor and social worker. She works at a nonprofit mental health clinic in Los Angeles. She isn't royalty but she is a sterling example of all that's good about America. In a land that idolizes rappers, protestors, criminals, and athletes alike, Ms Ragland stands apart as someone young women of color can look up to.  Life pulled her down at times but she never allowed it to drag her under.

The bride's entrance pleased the crowds.  It's no wonder, as Givenchy is synonymous with style and grace, and Meghan carries herself well in a contemporary masterpiece. 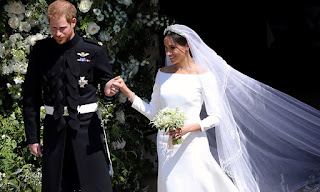 I wasn't fond of her entrance music. Some notes sounded under-supported. (Galadriel's Song of Eldamar - Ai! Laurie Lantar - this was not!) At least the singer had a nice hat.

This brings me to this post's heading: "That's Some Bad Hat, Harry".

Prior to the wedding, I looked at the sea of women's hats and thought to myself, "God, this shit is atrocious.  The logo sprang to mind as Prince William whispered to his brother before the wedding party arrived, causing Prince Harry to smirk. 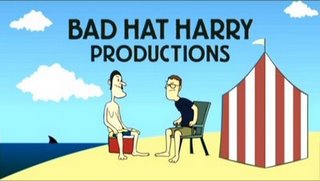 Bad Hat Harry is a reference to a scene from Steven Spielberg’s 1975 blockbuster Jaws in which police Chief Brody (Roy Scheider) tells an elderly swimmer named Harry that he has an ugly swimming cap: “That’s some bad hat, Harry.” The production logo depicts an animated version of the scene.
- Mental Floss, "The Stories Behind 9 Iconic TV Production Logos"


Was there a rhyme or reason behind this year's hat designs?  They seemed to get progressively worse depending on one's social standing. The common folk outside, as well as those seated in folding chairs outside the sanctuary proper, had tasteful coverings. Once the camera panned inside, hats seemed to carve sections through the area.

Keep in mind that British (and royal) wedding etiquette dictates that women should wear hats or fascinators to a wedding, so the accessory is inescapable. Yet it all becomes explicitly strange and increasingly bizarre the closer one came to the front of the church.

These oddities made hats at the Kentucky Derby look bland. Hell, some of these wedding hats put Lady Gaga's imaginative "pink sperm" to shame.

For example, we have Oprah's tasteful cambric. 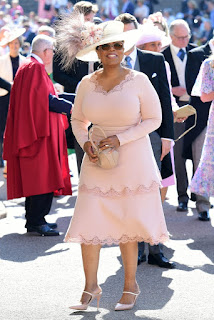 This progresses to tasteful-yet-edgy (I believe it's Kitty Spencer): 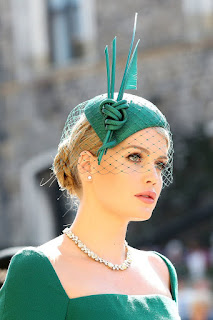 Sarah Ferguson takes it up a notch with tatty tent leftovers.  (I still love you, Fergie) 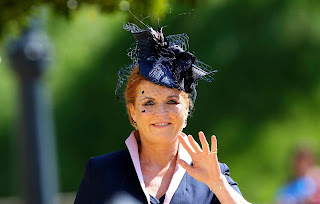 Amal Clooney turned up in a glorious fascinator resembling a round nacho. 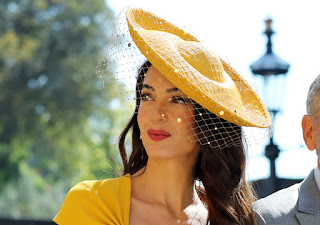 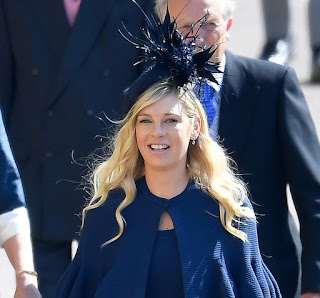 Girl, you need only look to Princess Anne to see what class is. 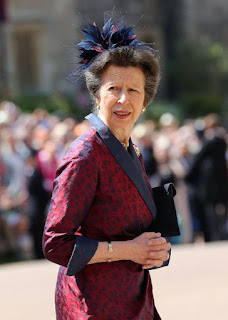 I can't find a single picture of the "hoop" hats.  You can watch the beginning of the video released by the Royal family to spot these orbiting, circling, off-center fascinators. These are the ones that enter the Gaga Zone.  They aren't on par with Princess Beatrice's 2011 now-infamous raised toilet seat headpiece, but they come within reach. 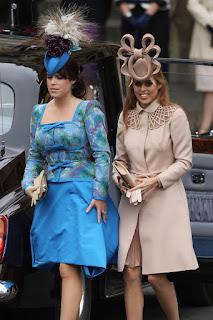 At last, the guests were seated.  I thought I was done with the Clockwork Orange-esque indoctrination of these heinous status symbols... but no, oh no, they were not done.  In came the Duchess of Cornwall.  She knocked her sociopolitical competition out of the water with a hat reminiscent of whatever a flamingo would shit out of his ass after a night of drunken preening.

It doesn't help that the off-center cambric itself is nest-shaped, offering the smooth silk cap in such a fashion that I question whether or not the entire piece can be substituted as the world's priciest hemorrhoid cushion.

(For those that don't know me well, I do not like the woman. I was more polite towards her than normal.)

In closing, my favorite part of these event wasn't the music, nor the attire, nor even the vows. It was the American bishop. I'm not a Christian, but his sermon delivery was powerful.


No one could deny the palpable emotion at St. George’s Chapel in Windsor Castle on Saturday as Bishop Michael Bruce Curry delivered a passionate message just before Prince Harry and Meghan Markle said “I do.”

Speaking of “the power of love,” Curry, who is the first African-American to serve as presiding bishop of the Episcopal Church, evoked the words of the Reverend Martin Luther King Jr.

"There’s power in love. Do not underestimate it. Anyone who has ever fallen in love, knows what I mean. But think about love in any form or experience of it. It actually feels good to be loved, and to express love. There is something right about it. And there’s a reason. An old medieval poem says it: ‘Where true love is found, God himself is there.’ There’s power in love. Love can help and heal when nothing else can. Love can lift up and liberate for living when nothing else will. And the love that brings two people together is the same love that can bind them together, whether on mountaintops of happiness and through valleys of hardship. Love is strong as death. It’s flashes are flashes of fire. Many waters cannot quench love. Love can see you through! There’s power in love." 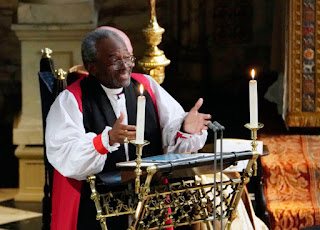 The Royals' "WTF?" expressions regarding his delivery and contents - followed by a fantastic gospel choir's "Stand by Me" - made it priceless.

Right, wedding over. Time to get back to mundane life.
Spring 2018