REFLECTIONS: How the American Media Fuels A Cycle of Violence 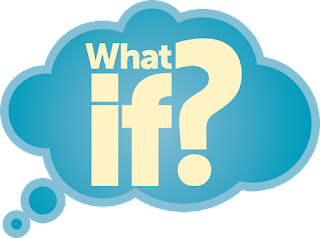 I tend to become philosophical when bored.  In particular, I enjoy the "what if" scenario. This category of question frequently graces my thoughts while reflecting on my life and circumstance.

Most know that the Internet, chiefly YouTube, became my haunt while going through cancer treatments.  I was sequestered for weeks while enduring RAI. I was bored, and I was getting tired of the questions springing to mind every hour of the day. "What if we hadn't bought a house so close to a coal seam?";  "What if we had caught the cancer sooner?";  "What if I had never moved to Ohio?"; "What if Obama had never been President?" (The answer to the last one is, "I would be dead because I couldn't afford health care.")

It's not surprising that I retreated from my circumstantial "what if" questions by looking at larger hypothetical situations. "What if we never broke from the UK?"; "What if Hitler won the war?"; "What if the Roman empire had never fallen?"

In particular,  AlternateHistoryHub helped fuel my musings. He bills his YouTube niche as "An entire channel dedicated to the 'What If?". Using knowledge of geography, population and other historical facts I predict what could have happened had things gone differently in history." I loved his approach to the topics, and didn't mind the low-budget flash animation.

Today's personal "what if" musing came after logging on.  Every news source carried coverage of the latest school shooting. I began to ask myself, "What if we didn't broadcast this shit 24/7?" It isn't a matter of our country becoming desensitized to these events.  It has everything to do with the media making money off high school students' suffering.

The media has always ticked me off.  Weeks of ebola coverage drew millions.  Princess Diana's death smeared every paper and television channel. Now that we've seen a shift from television to internet as a primary news source, we must endure 24-hour coverage of repetitive hotbed topics.  The ease of access, any hour of the day, has conditioned the American people to "tune in" every time they want to know what's going on outside their front doors.

It's all about ratings. The higher they are, the move revenue broadcasters can make off advertisements.  Fox is making billions by cornering the conservative, pro-Trump market.  They spew positive support for a single man, and greedily devour more earning every time Trump promotes them.  Many employees don't agree with Trump. Some loathe him.  Yet they collectively kiss his ass for sake of precious revenue generated - not by Trump - but by the amount of viewers supportive of Trump. In other words, Fox News uses conservatives. It vomits spin - regardless of accuracy - to keep those conservatives coming back for more.

Other news agencies, including liberal sources, follow the same pattern.  They really are all the same. Same formula, same spin generating tactics, different takes on a topic.

Of course, most people watch whatever media channel most matches their views.  It's the wedge that divides us. Feed your mind garbage daily and you'll soon become convinced that opinion is truth.

In addition, we've become a bit egotistical. We crave the likes, and loves, and thumbs-up.  We flock to Facebook, Twitter, and other social media sites to promote our lives.  We blog. We often take on the same hotbed topics - either to express our parroted opinions or else to create controversy in order to grab viewers.  We monetize our shit once we realize just how many people follow us. We copy-cat other's successful bids for attention.

(I do not monetize my blogs or personal forums, for the record.  I don't care how many views my tweets and posts receive.)

The questions beg to be answered: What if we didn't have this medium available?  What if the media stopped glorifying controversy and violence in a bid to gain viewers?  What if these repetitive topics are the reason behind so many copy-cat school shootings, or peaceful civil rights protests twisting into riots, etc. What if the cycle of violence exists simply because we want attention and the media bankrolls the revenue generated by their ability to acquire viewers via coverage of our deeds? Let's abuse the media for personal or group attention even as it abuses our actions for profit.

This brings me back to AlternateHistoryHub.  I had rolled my eyes at the Texas shooting stories peppering almost every greedy news source and then skipped off to YouTube to binge on anything that didn't mention guns, shootings, violence in America.

I noticed that AlternateHistoryHub uploaded a new video. Imagine my expression once I realized Cody touched upon my "What if we didn't broadcast this shit 24/7?" question.


"How the American Media Fuels A Cycle of Violence"


It's his non-monetized take on an overall picture rather than focusing on gun control or other political angles.  He's dead on, in my opinion - no pun intended.

You don't have to agree with his video, or with my opinion regarding it.  This is just a pensive moment to kill time before dragging myself downstairs to make coffee.
Politics Reflections Spring 2018