I digressed far too much in my prior post, "BISTABLE PERCEPTION PART 1: Viral "Laurel" vs. "Yanny" Phenomenon", and edited out a huge section. However, people have also asked if bistable "visual" perception was similar to bistable "audio" perception.

They are different yet similar.  Sound, such as the current "yanny" vs "laurel" viral phenomenon, is about sound frequence.  As I explained, we all hear frequencies a tad differently depending upon our age, the health of our ears, and our mind's ability to unscramble the sound.

Bistable illusionary perception does not rely on sound frequencies, in other words.


Unlike optical illusions that utilize the misinterpretation of the human brain to create illusionary perception different from the physical measurement, illusion optics changes the optical response or properties of objects. Illusion optic devices make these changes happen. Although both these terms deal with illusions, Illusion optics deal with the refraction and reflection of light, whereas while optical illusions are basically mind tricks.
- "Illusion Optics", Wikipedia, The Free Encyclopedia


Optical illusion: A quick mind can sort both images in a matter of seconds (or minutes, if the artist is very good at what they do).  Case in point: 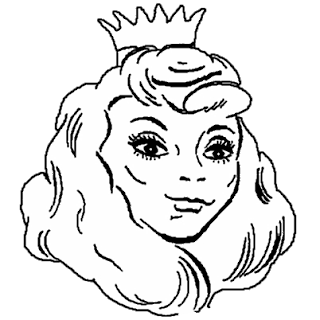 Isn't the princess unique?  Thick flowing hair, entirely too much mascara, and a simpering pout. If you look hard enough, you can see shades of her future.

The saying "beauty fades in time" is most appropriate here. 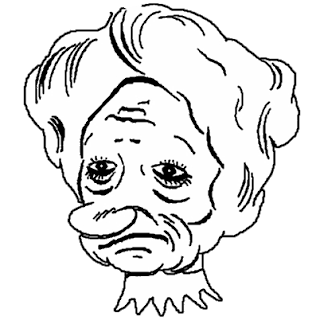 There are two stable images combined into one.  Our mind is presented with the princess first.  It may also see the old crone but some people have to "work at it" to find her in the top image.

This is one of my favorite examples of bistable perception:

What do you see in the Venetian mask above?  A single face?  How quickly did your mind work out the second image?

In bistable perception, we experience a slight mental pause as our mind works out both images. This seconds-long pause is known as inter-reversal time.

Focus on the face and let your mind do its job, and you'll discover that the "face" is also two people kissing.  That which has been seen can not be unseen, fam.

Do you also see the face/couple slightly shaking?  It's not moving. That's a phenomenon associated with inter-reversal time and age - meaning your brain is flipping between images at a rate of milliseconds or faster, but the communication between your eyes and brain is slower, not adjusting as it should.

Or else those six cups of coffee screwed over my perception.

Or my eyes are weak. I do wear coke bottles.

Bistable vs Multistable vs Illusion Optics
Terminology is everything with the perception game.  The images above are classified as an optical illusion under the bistable perception category.  However, optical illusions deviate at times, leaving the "bistable perception" category to enter the "Mutlistable perception" category.  We aren't necessarily forcing our brains to choose between two ambiguous images.  Rather, these illusions force our brains to determine whether or not the image we see is real and "true". It becomes impossible for our brains to interpret size, scale, movement (or lack of movement) and so on. We struggle to work out the actual pattern.  The semantics (multi- verses bi-) are debatable, however. To the common man, all these words are used interchangeably for whatever reason.

What is an Optical Illusion?


Optical Illusions can use color, light and patterns to create images that can be deceptive or misleading to our brains. The information gathered by the eye is processed by the brain, creating a perception that in reality, does not match the true image. Perception refers to the interpretation of what we take in through our eyes. Optical illusions occur because our brain is trying to interpret what we see and make sense of the world around us.

This illusion [optics] is a magnificent example of how we perceive illusory motion from a stationary image. The "snakes" in the pattern appear to rotate as you move your eyes around the figure. In reality, nothing is moving other than your eyes!


If you hold your gaze steadily on one of the "snake" centers, the motion will slow down or even stop. Our research, conducted in collaboration with Jorge Otero-Millan, revealed that the jerky eye motions—such as microsaccades, larger saccades, and even blinks—that people make when looking at an image are among the key elements that produce illusions such as Kitaoka's Rotating Snakes.
- Mental Floss: 10 Award-Winning Optical Illusions and Brain Puzzles


The article goes on to note that not everyone can see the rotation. "Older people perceived less illusory rotation than younger subjects".

I fart dust yet the Rotating Snakes Illusion rotates like mad for me.


Hmm, speaking of optical illusions, I may have to do a post on Prince Harry and Ms. Meghan Markle marriage ceremony.  My god, Brits, some of those hats are fucking atrocious!

____________________________________
As always, the information stated here is my opinion and not necessarily fact.
Please don't hesitate to reach out to me if you have questions.  Bear in mind that I wax poetic regarding theories and hypothesis; the accuracy of my interpretation may be askew though I welcome positive critique and correction in the comments section.

Also, sorry, but I probably won't start making YouTube videos anytime soon. I get enough ribbing from Hummingbird, Bash, Yolandercuz, and Honey Badger regarding my "whiskey voice".  Hey, fam, you bastards keep smoking and you too can sound like me in 20 years. (At least Better Half doesn't tease me.)
Science Spring 2018