April 17, 2018
Younger generations probably don't remember Barbara Bush in her prime.  They may have been born while her husband was in office, but most didn't hit their early strides until the Clinton era.  To be fair, those under 40 didn't live during the tumultuous 60's, and have a child's perspective of the 70's.

That's not to say that people that young don't have an understanding. However, they can not explain the 60s and 70s from an adult's perspective - they gleam insight from books, or from listening to their parents talk about that era.

Some are old enough to remember the 80s. They recall the Reagan years with clarity. They remember sitting in front of their televisions as teens or young adults, and listening to the President's speeches. They can tell you about the odd shivers that tingled their spines as the President stood at the podium in West Berlin in 1987 and said, "General Secretary Gorbachev, if you seek peace, if you seek prosperity for the Soviet Union and Eastern Europe, if you seek liberalization: Come here to this gate! Mr. Gorbachev, open this gate! Mr. Gorbachev, tear down this wall!"

This was an era of promise, of American pride, of American strength.  I don't care what your liberal teachers brainwash you with... if you have not lived it, you can  recall what the country's mood tasted like.  We were making great strides for blacks and for women, and we pushed forward with technological advances. (Incidentally, this flavor is was Trump is trying to create, and he uses nostalgia as his tool. Old 60s and 70s babies eat up nostaliga, and so many people my age and older voted for him because he cast himself as someone who could re-Reagan the nation.)

As the Reagan term drew to a close, Vice President Bush threw his hat in the ring. "Why not? We were riding a high. Let's continue it."  Thus we got Bush.

I won't badmouth him.  He wasn't what I had in mind for a President, but that's alright. The person that captivated me was his wife, Barbara - affectionately known as "Babs".

Barbara was everything Nancy Reagan was not. She sharply contrasted Nancy Reagan - Nancy's austere mannerisms and outfits, her pinched smile, and her "Just Say No!" campaign grated on us kids. While Nancy came cross as "Hollywood elegance", Barbara was down-to-earth, a matronly figure people could relate to.  Plump, with white hair and her customary pearl necklace, she was a grandmotherly sort - someone you'd expect to find reading to children in the library when not baking cookies. 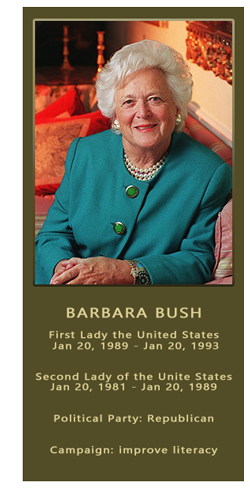 The real Barbara Bush was made of iron.

She was energetic and sweet, and excelled at swimming and tennis in her youth.  She matured into her role as wife and mother, taking everything with a grain of salt. As a testament of her internal fortitude in the face of adversity, young Barbara's hair went prematurely white in 1953 after the death of her four-year-old daughter, Robin. Barbara was only 28. She refused to succumb to her grief. Rather, she pulled herself up by her bootstraps and marched on.

George and Barbara did not have a modern fairytale marriage. Rather, it's the story of a man whose work took him away from home, or who had to relocate his family depending on where he was sent.  Barbara remained steadfast, rearing their children and supporting her husband. Sometimes life was grim and the future unknown. It was Barbara that made life bearable, and she cast a positive light on whatever lied ahead of them. Her book, Barbara Bush: A Memoir, is a wonderful snapshot into this history.

This is the book that impacted me the most in my 20s. I couldn't care less about the political scene.  No, it was Barbara's wit that kept me reading. Stories of their time in China, sad passages as they dealt with hardships and loss, and the joys of motherhood kept me spellbound.  I wanted to be like Babs, even if I was just some punk with a bald head and far too much leather.

Of course, I was no Babs.  I didn't have her impressive lineage.  Her roots went as far back as colonial years, right back to Thomas Pierce Jr.  She was the fourth cousin (several times removed) of Franklin Pierce. Yeah, Babs had connection to the 14th President. She was as American as apple pie.

I, on the other hand, am the product of immigrant families from Hungary (my paternal line) and Italy (my maternal line). Most of my aunts and uncles are first generation Americans.  My first cousins and I are second. My father's side is a mix of Hungarian and Romany. Boarding schools and formal dances at country clubs? Psh. My generation went to Catholic schools, and the only dances we had were in the school gym. It was embarrassing. Nobody wants to be seen as a dirty immigrant.

Babs changed my perspective. It didn't matter who you were or where you came from. She was an advocate of humanity. She never judged anyone based upon their background. She was color blind to race.  Her approach gave me hope. It also introduced me to egalitarianism - the doctrine that all people are equal and deserve equal rights and opportunities.  It taught me the value of philanthropy. It gave me reason to volunteer my time helping disadvantaged youth, and to step up my feminist efforts in order to help the younger generation excel.

Was Barbara a feminist or liberal? No. Most feminists loathe her because she chose to be a "stay at home" mom. Most don't consider her to be liberal, though I believe this is because they can't really cite off the top of their head anything she's done.

It was Barbara that said, "Believe in something larger than yourself... get involved in the big ideas of your time."  She encouraged people to get involved, to make a difference in their communities and to the betterment of society.

She also said, "And who knows? Somewhere out there in this audience may even be someone who will one day follow my footsteps, and preside over the White House as the president's spouse. I wish him well!"

Hm. In my effort to track down that quote, I found a neat tidbit surrounding it.


Her popularity was increased by her appearance at commencement ceremonies at Wellesley College in June 1990. Despite protests from some students who thought that she did not represent the type of independent woman Wellesley sought to graduate, Barbara and Raisa Gorbachev, wife of then Soviet leader Mikhail Gorbachev, received an enthusiastic welcome. She delighted her audience by concluding her speech with the speculation that someone in the audience might someday follow in her footsteps as the president’s spouse—“and I wish him well.”

I recall a working relationship between Barbara and Raisa, but I'd forgotten just how well they jived.

It's important to realize that Barbara didn't always agree with her husband on important issues, including gun control and abortion rights, yet she kept her views private rather than spilling her opinion all over the media. These were things she would confide in to her husband - not to sway him, but to give him a differing opinion. It gave the general public a positive image rather than showing any discord between the President and First Lady.

It's 2018, and the media reports that Barbara has decided to go home to live out her last days.  She's been very ill lately. Her COPD has taken its toll.  No more aggressive treatments for her. Babs has chosen to go quietly.

She was alive when I began writing this post earlier today. Regrettably, I've just learned that she has died.


Barbara Bush, who was the wife of one president and the mother of another and whose embrace of her image as America’s warmhearted grandmother belied her influence and mettle, died April 17. She was 92.


The office of her husband, former president George H.W. Bush, issued a statement Tuesday evening announcing her death but did not disclose the cause. Mrs. Bush was reportedly battling chronic obstructive pulmonary disease and congestive heart failure. Her family announced two days earlier that she had “decided not to seek additional medical treatment” after recent hospitalizations amid her “failing health.”


As the matriarch of one of America’s political dynasties, Mrs. Bush spent a half century in the public eye. 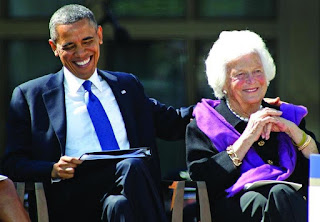 Rest in peace, Mrs Bush. Thank you for inspiring me in my youth, for inspiring so many struggling with depression, for improving literacy, and for staying classy.