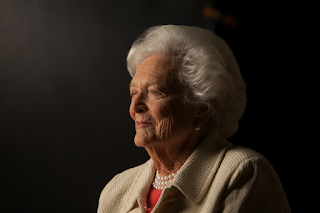 I didn't watch Barbara Bush's funeral.  I wanted to remember her as the lively person, and not see a casket.  I should have watched. Jeb Bush delivered a powerful eulogy.

I realize some of my younger readers see in only black and white.  Republicans bad, Democrats good - or vice-versa.  They hear "Bush" and loathing rises in them. They weren't alive when Bush was President. They base their emotions and opinions on what they've been told by liberal society and their college professors.  They disparage Barbara for being married to "an idiot" (frequently mixing her up with Laura and G.W. Bush).  They call her frumpy. Fat. Too old. An example of male oppression because she advocated family first. They never took the time to hear her heart.

Some of my generation felt the same way with Michelle Obama.  When President Obama first took office, they looked at her and thought she was too harsh and angry.  Too thin. Too black. Too tall. They couldn't see past appearances. They never took the time to see just how much the Obamas loved each other, or how much respect President Obama had for his wife. They didn't want to accept her zeal for children and America's health.  Michelle, like Barbara, remained steadfastly beside her spouse during the most difficult times.  How many die-hard conservative young women have missed out on the lessons Michelle imparted regarding love, life, family, and conviction?

Sometimes it takes a loss before we realize just how much someone impacts our lives.  Jeb's eulogy was spot on.


This was the feisty-and-firm woman I had come to love in my youth. It saddens me to know her light is gone. It saddens my further that young women today didn't get to see her at the top of her game, when she was in the news frequently enough to be a strong role model.

As I said in my earlier post, Barbara taught me what it meant to truly be egalitarian. She was an advocate of humanity, regardless of who you are or where you come from. She was color blind to race.  She supported women.  She believed that all people deserve equal rights and opportunities.

Barbara embraced many traditional values, but she realized that her values were her own, and she didn't try to change other people to fit her mold. There was nothing wrong with being liberal, provided a person realizes that beliefs make them who they are and thus they should build their values upon a strong foundation. If you build those values upon whatever is popular at the time, you'll find your foundation shaky once public perception shifts.

Our country has become too divisive. We're too quick to dismiss something as being too conservative or too liberal.  We plug our ears and refuse to listen to anything that doesn't align with our principles. We fail to see the good parts of the opposite side. We're too extreme.  There doesn't seem to be any middle ground with this generation and, if there is, it is beaten down by both sides - "maverick", "rogue", "traitor", "tom".

Perhaps what America needs is a swat on the rump before being sent to bed without supper. We can't do that to children anymore, nor can we do that as a society.  Nobody tells us "no".  Nobody is allowed to flick our ears and tell us to behave.  If they do, we pinch our faces up and throw a tantrum.  We feel we're entitled to do whatever we want, say whatever we want, think whatever we want, treat others however we want. Yes, we're allowed those things but we have not learned temperance, humility, nor grace in order to say it in a way that doesn't reek of contempt and bitterness.  We don't know how to behave in polite society.  We have only our society to blame for bad "parenting". People today build their ideals on the past generation's lessons without ever having experiencing the hardships that shaped it.

A generation from now won't remember all the good Michelle Obama did. She, like Barbara, will become a talking point in a text book - one that never goes too in-depth.  They won't realize that the of the greatest First Ladies put aside their political affiliations to create goodness in the world. 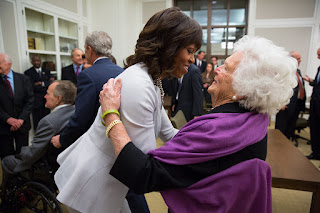 The Obama's public statement upon learning of her passing is an example of two people paying respect to someone they called a friend, despite political affiliation.


Statement from President and Mrs. Obama on Barbara Bush’s death:
Barbara Bush was the rock of a family dedicated to public service, and our thoughts and prayers are with both Presidents Bush and the entire Bush family tonight. We’ll always be grateful to Mrs. Bush for the generosity she showed to us throughout our time in the White House, but we’re even more grateful for the way she lived her life – as a testament to the fact that public service is an important and noble calling; as an example of the humility and decency that reflects the very best of the American spirit. She’ll be remembered for passing those American values on to her children, her grandchildren, her great-grandchildren — and to the countless citizens whom she and George inspired to become “points of light” in service to others.