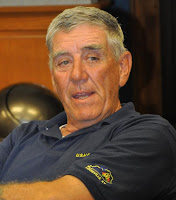 BH and I were shocked when we learned that R. Lee Ermey passed away.  His personality was larger than life, and his contributions to the world are far too extensive to list.  Nor could anyone make a full list, really.  It's the small stories coming from everyday people that are the most poignant. There isn't any way to accurately capture what he meant to those he inspired - and he inspired thousands.

Ronald Lee Ermey (March 24, 1944 – April 15, 2018) was an American solider, actor, and voice actor. He achieved fame when he played Gunnery Sergeant Hartman in the 1987 film Full Metal Jacket, which earned him a Golden Globe Award nomination for Best Supporting Actor. Ermey was also a United States Marine Corps staff sergeant and an honorary gunnery sergeant. During his tenure in the U.S. Marine Corps, he served as a drill instructor.


Ermey hosted two programs on the History Channel: Mail Call, in which he answered viewers' questions about various military issues both modern and historic; and Lock n' Load with R. Lee Ermey, which concerned the development of different types of weapons. He also hosted GunnyTime on the Outdoor Channel.1

Matsimus, of Matsimus Gaming, created a beautiful video tribute yesterday.  Titled, "R.Lee Ermey - A Tribute to a Military Legend", it captures Ermey at his best and brightest.

He wrote in his comments section, "I am truly having a hard time tonight making this video and knowing this man has left our military community.

He was a role model for me when I was young. He entertained many of us, inspired many more and served his country with every part of his mind, body and soul. I cannot express the respect I have for this marine and true patriot of the United States of America.

I hope you can share this video and remember some moment in your life when you first experienced his personality. Whether it was in a film, show, in person or just in hearing. He will be sorely missed.

"R.Lee Ermey - A Tribute to a Military Legend"


I echo that sentiment, though I never served myself.  If I have one personal tidbit to add, it would be of Ermey's ability to impart Marine spirit.  The buzz was all about him in during the filming of Full Metal Jacket.  Hired on as a technical advisor for the actors (specifically the one originally slated to play the DI), his presence and bearing far surpassed the others portraying "seasoned" Marine roles.  Stanley Kubrick dropped the original actor and cast Ermey instead. Best decision ever.

BH and I were touched by the numerous tweets sent out by various government agencies and military branches, as well as business partners, former co-starts, and a hell of a lot of people that he inspired.  At the moment, Ermey's Twitter page is a solid wall of testimony to the amount of respect this man earned.


#RIP to R. Lee Ermey, the @USMC #Marine and #VietnamWar #veteran known for his famed role as the intimidating drill sergeant in #FullMetalJacket.

Over a military and film career spanning more than five decades, Marine veteran R. Lee Ermey was a drill instructor, actor, and television host responsible for motivating and inspiring military and civilians alike.

We sadly announce that R. Lee Ermey ("The Gunny") has passed away.
The Gunny has been many things for many people, but most importantly he was a treasured friend and co-founder of our brewery.
We will deeply miss him, but his legacy will live on.
Semper Fi, Gunny. pic.twitter.com/HtJzyEVAm7
— BraveryBrewing (@BraveryBrewing) April 16, 2018


Rest in Peace, Gunny. Thank you for your service to our country, and for so many years of fine entertainment. We will miss you.