A DAY IN THE LIFE OF A COMMANDER: Pranks


Nobody ever said command was easy.  It usually isn't too rough, if you have a supportive command staff.  I do. In fact, I have four outstanding gentlemen that I turn to when things need done right.

Three of them were at the National Guard facility today for Wing-wide training.  Our squadron is hosting.  I was absolutely confident things would go well with them on hand.

No battle plan ever survives contact with visiting squadrons, however.  And so it was, as I was leaving squadron this evening, two of my staffers rolled up to get signs for the road. They relayed information about an incident involving a visiting squadron.

Apparently the colonel driving the van pulled behind the Guard facility - and onto the flight line.  Not only did the Guard bark at him, but my Advisor to the Commander did as well. Well, good! Safety first, people.

Satisfied that things would go more smoothly, I left to retrieve some things accidentally left at home.  It's an hour drive - two hours round trip. That meant navigating unfamiliar roads in the dark, stopping to enter gate codes, and maneuvering around tire-killing potholes.

The only lit area in the vicinity was the Guard's building entrance itself, and this paltry gloom came courtesy of a security light and the glass front doors.  As I pulled into the parking lot, I noticed three shapes silhouetted in front of that entrance.

It's hard to miss them. They looked for all the world like a linebacker flanked by two safeties. Taller than me, and much more broad shouldered, these are the sort of gents that sensible people just don't mess with. Luckily, all three were my command staff.

Their hangdog expressions puzzled me. Things weren't too chaotic when I left.  How bad could it be if all three of them were standing outside?

"Well-" the Major sighed after some brief greetings, "things aren't going to good."

"No," he replied. "That's why we're out here. They're pretty angry in there."

By that, he meant the visiting squadrons.

"What happened," I groaned, though I was thinking Oh Lord, somebody damaged a UH-60.

The Major jabbed a thumb towards the linebacker, my Deputy Commander for Cadets. "Well, after I barked at that colonel, he yelled at the major, and he-" the thumb jabs shifted to the squadron NCO - "pissed off that other officer. They called Colonel [Wing Commander]. He says to stay here; he'll be here in a five minutes."

Flustered, I demanded, "The fuck did you all do?!"

Their furrowed brows and miffed expressions vanished into humor.

Considering these three are surrounded by cadets this weekend, I suppose I should prepare for the inevitable. 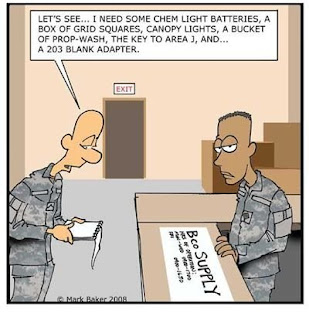