March 12, 2018
It's slightly after 3 AM and I, in the grips of insomnia, have spent the last hour mindlessly listening to History's Greatest Hoaxes. The current offering covers Nessie. 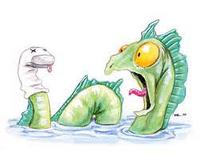 As some may recall, I'm a paleochick when not bemused or gruff.  Of course, I'm going to pay a bit more attention.  It's one of my favorite hoaxes.

The Loch Ness Monster
The Loch Ness Monster – Nessie, one of Scotland’s most famous tourist attractions even though nobody can prove conclusively that they’ve actually seen it. Since the first ‘sighting’ in 1933, this most elusive example of cryptozoology has fascinated the world – and attracted any number of hoaxers out to convince everyone that they have the final proof that Nessie exists.

And it’s not going away any time soon, because the last 10 years have seen Nessie sightings hit record levels and this is despite the fact that the world’s most dedicated Nessie-hunter has finally decided to quit because he now thinks the monster doesn’t exist. (We’ll talk to him in this episode, by the way).

What we’ll do here is get the latest thoughts on some of the many examples of photographic evidence that have emerged – some actually quite clever and compelling, others…well, less so.

As we said, some evidence is more convincing than others…
So here are the latest thoughts on the Spray Photograph, the Surgeon’s Photograph, the Italian newspaper report that Nessie had been killed by a direct hit from a bomber, the MacNab ‘humps’, the discovery of Nessie’s ‘body’, and the ‘monster’ created for a TV documentary.

How and why did they do it? What do the locals make of it all? And most intriguing of all – what actual scientific chance is there that there may be ‘something’ lurking in the depths of the Loch? -  the History Channel

They bring in an expert - none other than Dr Darren Naish.

I first met Darren through blogging eleven years ago.  I think we can all wince at our earliest efforts.  My posts were fraught with rants leveled at Jack Horner. At least Darren had interesting things to say.

He moved to ScienceBlogs, then later found a home at Scientific American.  It was a solid decision.  I'm pleased to say that Tetrapod Zoology is still active -  not more than ten hours ago, I was reading his latest article regarding the nonsense surrounding the super-rail, or Leguatia gigantea.  He's one of the few people I keep on my links list here.

His writing is brilliant. Until now, I've never heard him actually speak.  His voice is warm and intelligent, and a slightly wry smiles seems to curl his lip's corners as he points out interesting details about the plesiosaur-that-wasn't.

Stop by Tet Zoo, if you've got a few hours to browse, or pick up a copy of Dinosaurs: How They Lived and Evolved.