KNITTING (Part 1: the genesis of a hobby) 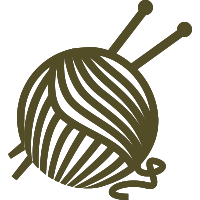 I've decided to knit.  I don't know how to, having never tried before, but it's been on my bucket list for several decades.  Might as well give it a go before I kick the bucket myself.

To be fair to myself, I did crochet as a child... if you count making single-chain "snakes" as a completed work. I never finished them, either. Instead, I'd make them as long as I felt right before bringing the tangle to my mother to finish off.  She wasn't a knitter nor did she like crochet.  These snakes had knobby, uneven knit heads with two eyes dotted on with a Sharpie marker.  My childhood efforts finally ended when I ran out of heinous 1970's yellow yarn.

Bear in mind, I'm not a girly-girl.  I wasn't into tea parties and knitting clothing for dolls.  I was into Hotwheels, explosions, and mayhem. Ever the tomboy, I found more pleasure in gently sending my stuffed animals into wild adventures than I did dressing them up. All my creative genes went untapped, though I would often sit on my bed and admire all the handmade creations adorning my shelves.

These were crafted with love by my nagymama - my paternal, Hungarian grandmother.  We lived in California, and she in New York City, so the opportunity to gain skills was seldom present.

So, here I am in my mid-40s, fired up about a new hobby and prepared to churn out masterpieces that rival my nagymama's.  I envision cleverly knitted hats and blankets in the future. I'm not going to kid myself.  I'm a beginner.  It isn't creating perfection right off the bat that matters to me.  It's all about giving it a go to see if it would be something I'd enjoy.

I'll start with a scarf for Better Half. It'll be lopsided, certainly. He might not wear it at all. He's usually too hot as it is.  But, damn it, it's my project.  It's my way of keeping my hands and mind active.  Regardless of how horrid it turns out, I'll cherish it.

The first thing I discovered is that knitting is a cheap hobby. Yarn costs less than a McCrap meal from a fast food joint.  Two skeins, a pair of bamboo needles, and a few other tools ran under $35 at JOANN in Steubenville.

The second thing I discovered is that having this shit in your cart automatically puts you in the Sisterhood.

I've never had anyone start up conversation with me in a craft-based hobby store before.  Usually, they eye me warily as though I were some odd guy masquerading as a female... or an old lesbian.   I'm short and stocky, with a haircut to match. Makeup and polished nails are for special occasions - like funerals.  Yet there in the line, two plump grannies and a hipster chick started up a conversation with me about daily life. Me.

They went on about kids (I haven't any) and school closures due to the teachers' strike.  They lamented not getting enough done in preparation for the upcoming wedding/graduation season (it's only March).  I contributed a bit about gardening, but all the while I just couldn't figure out why they would include me in their gab.

Until it was time to check out.

"Good luck with your knitting project!" a granny proffered a genuine smile as she hefted her brimming bags of fabric away.

I stood there mutely, hands clutching the plastic-pack of bamboo knitting needles, and smiled.  Nobody ever wished me success when I was paying for nails at Home Depot, nor when I was purchasing oil from Autozone.

"Um, thank you!"  It was a timid-but-heartfelt response on my part.

Maybe there's more to this than just scarves?  Who knows. Now more enthusiastic about my decision to try, I went home feeling a touch better about my self-image.


I also bought a crochet needle. If push comes to shove, I can always make more snakes.
Daily Life Knitting