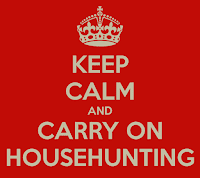 Found another one.  It's not that difficult, actually.  I'm just fussy as hell.  I can see past the beige and the bland, and the clutter and the stains. What I'm looking for is character - that special charm that my ideal home should have.  Hence I obsessively troll Realtor.com, sometimes hourly if I'm bored enough.  If anything, I currently have the luxury of being able to take my time with it. I can turn my nose up at things that I normally might jump at if we had to find a home in a matter of a week or so. 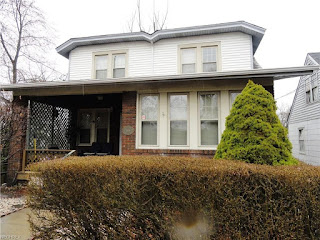 This newest offering intrigued me from the get-go.  It wasn't all that outwardly charming. In fact, it looked rather bland.  I'm not one for privacy hedges and evergreens.

Well, alright then. That's pretty close to what I'm looking for, but it's not a one-story. Perhaps it has charm, if the owners didn't tear off the built-in's doors (or label painted plywood boxes as "old world charm")?  In these parts, hardwood floors don't mean a floor you'd want to walk on. Not for a house under $180k. Under $80k, and you can collect rent from the termites to offset your mortgage. If you have a walker or wheelchair for mobility, those smooth floors are a  must.  "Sun rooms" are often porches with plywood slapped over the openings, then masked by vinyl siding, meaning there's no insulation.  Still, it's worth a glance at the photos. 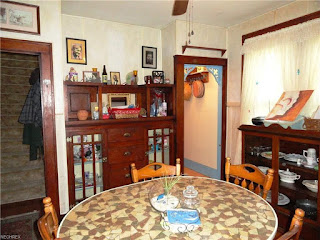 Straight stairs!  That means a chair lift can be fitted for BH!  And, I'll be damned... that's an actual built-in cabinet.  In fact, it has numerous ones, including lawyer cabinets in the living room, and a wall cabinet in the kitchen. The sun rooms, front and back, are integrated with the house, including insulation and vents.  These are entered via double french doors at each end.  Nice.  The floors and doors seemed in decent shape. It had a lot of charm.  Better Half and I decided to call the agent.

This was an adventure in itself. It's Thursday, the day before the Easter weekend. The woman was absolutely lovely to network with (via the power of text) and, despite it being well after 8 PM with her leaving on a plane at 8 AM the next morning (which means rising at 5 to get to the damn airport), she set her gears in motion and made certain we could view it with another of her agents.

The twenty-six photos online do not due the house justice.  It's absolutely gorgeous inside.  Exposed brickwork - properly done rather than just having plaster pulled off the wall. The interior chimney wall still has exposed ironwork latches both upstairs and down. Door knobs are all original and work. Exposed plumbing looks as it should - the copper possesses the perfect patina and is in excellent shape. There isn't any knob-and-tube wiring (it's been modernized to fit with code) and the furnace is relatively new. In fact, the owner took the trouble to remove the old coal furnace though the coal room is still there.

The current occupants haven't lived there in eight years, though the mother did.  They are back in town to help their mother to resettle in NC.  Things were a bit chaotic, but it's easy to see around that chaos when you're looking for particulars.

In fact, I'd rather see it messy. The eye can be easily tricked if a house is staged properly enough.  Rooms can appear bigger, faults become hidden by furniture, fake scents dissuade the mind from focusing on mold (or worse) in order to appreciate the cinnamon-laced dough ball heating in the oven.

We had an opportunity to talk with the owner's son and we appreciated his candor regarding the house's downsides.

Literally, the whole back yard is a heinous slope that requires ropes and a clever gardener. 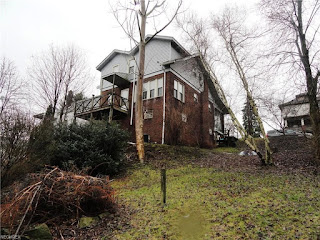 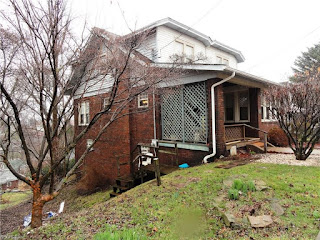 Those tiny houses in the background are across the alley at the property's rear, to give you an idea of just how steep that treed lot is.

It does have other drawbacks. For example, the stairs inside are steeper than standard, meaning that the tread is fine but the risers are unusually high. This was fair common in buildings out here, especially those built shortly after the Victorian and Edwardian eras came to a close.Climbing them left Jeff wobbly at the top. Yeah, we'll need that chair lift after all. I was terrified that he'd pass out in front of the agent.  "No, don't call 911. He does this. It's, um, normal after exertion. Yeah. Ha." Those are the conversations that never go over well.

The back deck is a concern. It's sturdy enough, but slick with the mossy slime so common out here. It leads down to the side of the house, which doesn't present much room for the dogs.  They'd have to potty in the front. Ugh.

Parking doesn't exist except at the curb. The double lot allows for more than one car, however we'd be in a size crunch if my little cousin came to visit. She has the same truck as us. There's no chance of getting a garage, parking pad, or storage shed built unless we pay to have the grade adjusted. No, thanks, but I can't afford that in this lifetime. I doubt anyone would help me crowdfund for it.

Oh, and there isn't any shower.  There's an old-fashioned tub.

That said, the stuff on the "pro" list outnumbers the "cons".

I do want a naturalized yard, and I've missed having trees surrounding the house. We even have room to plant more, and to naturalize more of the property.  I would have my wildlife habitat back again. Also, I'd be able to glance out my window and take comfort in nature.  This therapeutic act has been missing from my life for over three years.

The house's design allows for multiple living space zones, each encapsulated for greater enjoyment.  I could use the back sun room for my office. Better Half could have a whole room upstairs for his gaming crap and paperbacks. We could turn the living room into a comfy reading room, and then use the front sun room for a TV/movie den.  That would still leave us an extra bedroom upstairs, plus the largest bedroom for our own sleeping needs.   On nights when BH isn't able to stop shaking, I can retreat to the spare and actually get some sleep, just like we did in the old days! Miracle!

There's a laundry room on the top floor!  They cleaved the bathroom in half to make it.  This means we could do some cosmetic work to give the bathroom a more spacious feel, and drop in a shower stall where the old-fashioned sink stand is.  But, mostly, it's on the top floor. Good lord, that's a rare find!

The basement is exceptionally dry despite all the rain last night. Yes, there are a few damp places but that's to be expected in most of the old homes out here. Pallets keep moist from forming between cardboard and concrete. Plus the basement's height is just incredible.  Better Half, at 6', would not be able to jump high enough to slap the bottom-side of the floor above.

Not that Better Half can jump worth a damn. It's pretty entertaining, actually.

After reviewing all the drawbacks and bonuses, BH and I came home and decided to call the agent.  I already know the house won't qualify for a VA loan. Some dry rot on a fascia and a tiny seam between the basement bricks will require either us or the homeowner to make repairs before they'll finance.  We'll have to wait until Monday to see what options we have. Probably none.