March 18, 2018
We're thinking of finding a small place where we can expand... meaning a place where we can put our furniture, decorate and landscape as we see fit, and reclaim our lives as adults.  Better Half becomes an official senior citizen in a few days. It's time we rebuild our future.

I've narrowed it down to a few.  I'm hoping to take a look at one on Monday.  Given my drive to landscape the shit out of everything, I've drafted a basic garden plan.

It's currently bland lawn and a thin bed of manky hosta.   There really isn't much space. It's full shade come the afternoon/evening. 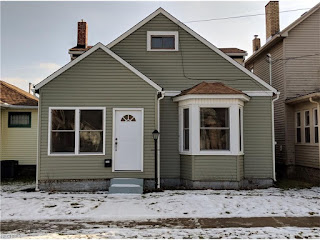 If I took up the grass, I'd have room for two rows of largish plants on the left, as there's a sidewalk between the thin bed and the grass. We could drop in an ornamental tree. The right is another thin bed with grass flowing to the city sidewalk.  I'd tear this out completely. 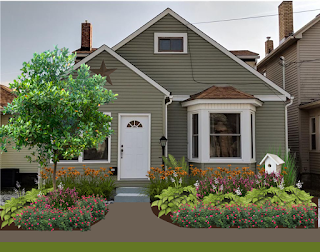 The beds would have dark bark for the winter months.  I tend to plant three season beds, so we'd have bulbs for the spring, flowering things for the summer, and then autumn plants would pop up just as the summer stuff dies back. Some of the fall stuff would remain during the winter for visual pleasure.

Of course, none of this matters if we can't get a loan and, considering how much we had to walk away from, there's some serious misgivings running through my mind.

If it's meant to be, it will be.  Simple as that.  Won't be the first time we've tried for a house.  We were pushed out of a bidding war on one, and couldn't get a loan for the other due to the house price vs square footage (under 700 sq feet).

Globe St has more square footage. 1416 sq ft to be exact.  It has three small bedrooms (one might have to serve as a closet because it's so damn tiny).  The layout would give us a few spare rooms downstairs for my office and perhaps a family room, depending on how much we want to squish into that space.  The big thing is that it will allow us to remain in our home once we're too damn old to manage stairs.  A first floor laundry room and a full bath on that level grant us some reprieve from basement or main stairs.

The downside is a lack of wall space.  Not much room for anything long, such as my grandmother's breakfront.  And, should my parents give up on being middle class and finally embrace their ramen-and-scratchy-toilet-paper income level, we would need to sort all of their shit and clutter, because there simply isn't room for all their stuff. No garage, either.

Would I allow them to move in after all we've gone through?  I won't turn them out into the cold. However, my house means my rules. We share all zones. They can't have a bedroom and a television room and an office all to themselves. They would have a bedroom, and then they'd need to purge excess in order to add choice items of their choosing (such as their filing cabinets and keyboard) to communal areas.  They won't be able to put up a ton of kitsch (they have several very nice items and a whole lot of excess stuff) - if it doesn't fit in their china or curio cabinets, it goes.  People will have to smoke outside.


UPDATE 19 March:
Nope. The downstairs was beautiful but the house, built in 1900, was showing signs of settling in a way that would cost us a bundle down the line.  Also, the upstairs rooms were too small for even a queen sized bed and small dresser.  What a shame.