Feeding time here is usually interesting.  Who would have thought so much effort would go into getting three geriatric dogs to eat?  The only one that wolfs down whatever we put in front of him is Gus, of course.  His obesity is proof of that.

Tonight's treat was a bit of canned food for Gus, though the others demanded some as well.  It was my guilt offering.

Poor Gus. He's the gentlest dog.  Earlier today, my mother's raindog (aka Dante) decided to attack him for the crime of walking into the dining room.  No blood spilled, though Gus stood his ground.  My mother smacked her dog's rump and sent him to a comfy chair next to her.

No. Uh-uh. This in no way sends her dog a message.  I got angry.  After all, I've lost my "shadow" to a dogfight in the past. I was not about to lose my PSD in a tragic manner.  I told her that her dog needed to go into his plastic kennel.  It would send a message: you are shunned for your behavior.  The lack of interaction and the ostracizing would reinforce her dominance as the alpha for her pack.

She balked and insisted her dog did nothing. She balked so much that my dad had to get involved and tell her off. Only then did the dog get put away.  This reinforced nothing. Too much time had passed.

I've had it. Final straw. I don't think she wants to acknowledge that reality is different than she wants it to be. She said nothing as I put a baby gate in front of my bedroom door to keep my little dogs safe.

"We need to move out!" I growled as I put on my jacket.

No reply from her. I left to pay the damn water bill.

I love my mother but I am not going to choose between the safety of my dogs and supporting her ignorance of her own animal's behavior.  The little angel is a menace.  This aggression is 24/7 - what with Dante's dominance humping, his insistent pawing at the 3 pound dog, and his continuous growling/barking/ snarling to assert his claim to every area of the house but our room. He's gone after Better Half.  He doesn't dare go after me.

Her excuse for allowing his poor behavior is, "I'm too tired to get out of my chair when he's bad".  Then why get him in the first place?

Neither BH or I hate Dante.  He's not beyond salvation.  He craves an alpha, and he's a perfect gentleman when my mother isn't home.

I found myself in the pet aisle at the supermarket this evening and, already feeling guilty for the sheer amount of stress my PSD is under, I purchased a can of chicken and rice mush.  He loves that stuff. 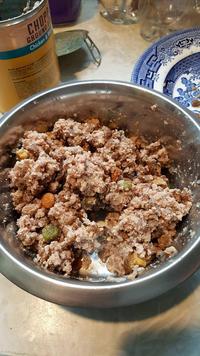 Gus is supposed to be on a diet - 3/4 cup dry kibble.  All the extras are not allowed.  Okay, maybe a bit of broth or pumpkin to keep him pooing on schedule.  Does Gus need it?  Nope. Does he deserve it? Sure.  Will his vet shake his head when we weigh him in at the next physical? Oh hell yes. He looks like a black rectangle with stumpy legs and a pointy head.  Gus, that is, not the vet.

As I mixed up the mush and kibble, I pondered the serving portion.   "How much food can you fit into one wiener dog?"

It was rhetorical but Better Half gave the perfect response.

"Depends on the size of the casing."

This conjured up a plethora of "yo mama" jokes in my head. You must get free wifi, because yo doggy so fat he's already world wide. Yo doggy so fat he has his own event horizon.  Yo doggy so fat you have to grease the door frame and hold a beggin' strip on the other side just to get him through.

Gus could lose weight if he had some exercise.  Daily walks would help. So would being able to play.  The bedroom is just too small to do more than throw a tug toy across the bed.  That's it. That's their entire play space.  Can't play downstairs. It's 'too much noise' and Dante barks too much for it to be allowed.

Needless to say, we're looking at another house tomorrow.  If it's meant to be, it will be.  I won't jump into anything without first making sure it's the right fit - passes inspection, can accommodate BH's disabilities, has a yard that can be made safe for the dogs. 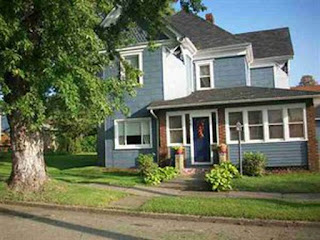 Meh. It's just under $40k.  The homes out here average $40-75k. Welcome to OH!   This one is 3 bedrooms, 1 bath, right next to the railroad tracks (we don't mind that noise).  The yards are large enough.  The inside seemed alright - I found an older listing from 2012, so the interior might not be as spiffy now.

We meet up with Carolyn to view it tomorrow at 5:30. Maybe... just maybe... we'll have a place where Gus can run.  If not, well, how fat can a dachshund get before they can't move around?

Heilige Scheiße!  Angus, mein lieber Hund, you are going on a diet.
Daily Life Our Dogs